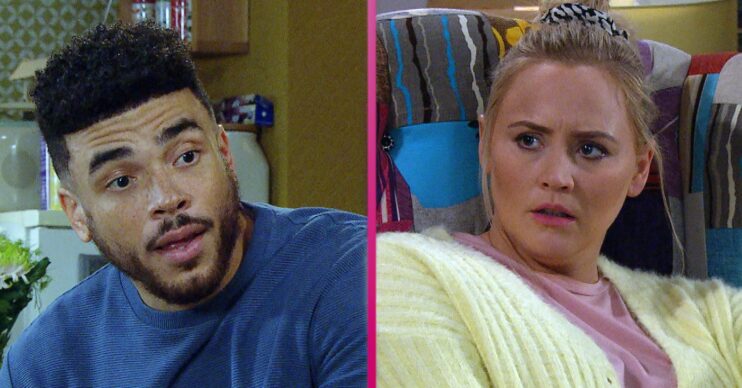 Tracy and Nate are engaged and have a daughter

Emmerdale fans are convinced Nate has cheated on Tracy with Fiona, who he met on a night out.

In last night’s episodes (Thursday, November 11) Tracy got all glammed up to have a night with her fiancé, Nate.

However Nate ended up heading into town with Billy Fletcher.

The two went for drinks but Billy got a call from Ellis and decided it was time to head home.

However Nate was soon approached by a woman named Fiona who was trying to get away from a strange man.

They chatted for a bit and as Nate went to leave he smashed his phone. They said their goodbyes but later Fiona approached Nate again and offered for him to go back to hers.

Soon Nate confessed he had a partner.

Fiona told him she just meant to use her landline to call a cab and that she also had an on-off partner.

Nate headed back to Fiona’s and ended up staying the night.

The next day, Billy covered for Nate and told Tracy that Nate stayed at his.

When Nate returned to the village, he said to Tracy he had been at Billy’s, but went to get his phone sorted early.

Read more: When are Coronation Street and Emmerdale next on? Soaps are both off air until Tuesday

Nate confessed he stayed at another woman’s house, but didn’t cheat on Tracy, but Tracy was furious and threw him out.

However fans are convinced he definitely cheated, and with his track record, it’s no surprise.

Nate has been busted 😬😬#Emmerdale

#Emmerdale I bet Nate slept with that woman

Surely Nate should realise he is talking to an absolute expert at cheating on women? Cain should be able to see right through him #Emmerdale

Has Nate been naughty then #Emmerdale

Emmerdale: Has Nate cheated before?

Nate first appeared in 2019 when he kissed Rhona Goskirk on a night out while she was dating Pete Barton.

He then had a fling with Tracy, Amy and Kerry.

He went on to have a relationship with Amy, but they soon broke up and he had an affair with Moira Dingle.

After the affair, Nate got back together with Tracy and the two ended up having baby Frankie.