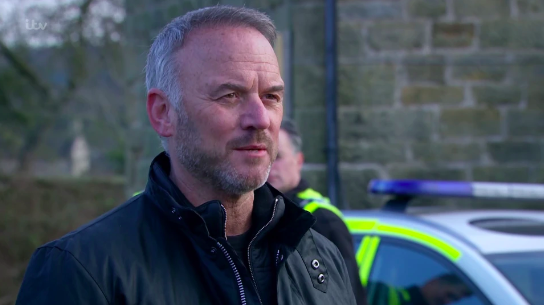 Does Wendy have a secret connection to Malone?

The midwife has been enjoying a flirtation with serial husband Bob Hope and this week he confessed his growing feelings towards her.

But when he plucked up the courage to tell her how he felt but she knocked him back.

However after Wendy’s mugging ordeal, Bob being Bob insisted he would stay by her side as he comforted her.

He helped her cancel her credit cards and change the locks on the cottage so she could feel safe – but there seemed to be more to her discomfort.

She seemed more on edge than someone who had had their bag lifted by a scooter robber – and she soon revealed why.

As they waited for Wendy’s son Luke to get home, Bob opened up about his feelings towards Wendy.

He told her how he had been falling for her since she arrived in the village and asked her out.

Who is Wendy’s ex?

Sadly for Bob, Wendy turned him down – but she explained why and it was heartbreaking.

He asked her: “So is there someone else?”

But Wendy said: “Not for years, the boys’ dad, long story, short he made my life hell and he broke my heart. So I’m happier on my own.”

And now with Emmerdale newcomer Malone turning up in the village and hanging around for reasons other than to torture Cain, Billy and Will, fans think they know why.

They are convinced that Malone is Wendy’s evil ex – and he has been secretly keeping tabs on his estranged family.

One said: “The ex who made Wendy’s life hell (and therefore the father of her children) could be Malone.

Read more: Emmerdale viewers hating on love rat Jamie as he manipulates Belle into sleeping with him again

“According to the actor who plays him he’s hovering around the village for another reason #Emmerdale.”

A second said: “Seen suggestions what if Malone is Wendy’s ex partner and Lukes dad #Emmerdale”

A third added: “Is Malone going to be Wendy’s ex husband #emmerdale”

Do you think Malone is Wendy’s ex? Leave us a comment on our Facebook page @EntertainmentDailyFix and let us know what you think!