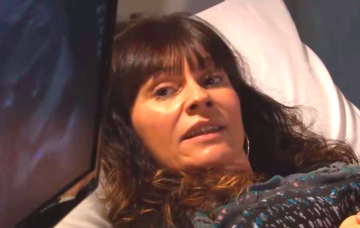 Emmerdale fans think Chas Dingle and Paddy Kirk are going to have a baby.

The couple suffered the tragic loss of their precious baby daughter Gracie last year after she was born with a condition that meant she would only survive for a short time after birth.

After the heartbreaking storyline, fans have spotted an intriguing spoiler they think proves Chas is pregnant.

Next week Chas will ‘confide a secret’ to Laurel Thomas during a special episode for International Women’s Day.

The episode will be made by and only star the women of the soap.

Fans are convinced the secret Chas shares with Laurel is that she is pregnant again – and they are sure this means the couple will have another baby and this time they will be healthy and happy.

A second said: “I wondered that, I think it would be really nice, but understandable that she’s keeping quiet about it.

“It would be a nice ‘end’ to the story arc too, for her and Paddy to still be heartbroken, but get a bit of a happy ending.”

A third said her talking to Laurel would have more poignance than just talking to a friend because of Laurel’s own tragic loss of her baby Daniel.

They said: “And actually might make sense why she’s talking to Laurel, who lost Daniel, and then ‘found’ Arthur, and had Dotty, for Chas to have lost Grace then have another happy healthy baby.”

Another said: “I’d like this for Chas and Paddy.”

Actress Lucy Pargeter won rave reviews for her performance during the Gracie storyline, but she admitted it left her drained.

She said at the time: “It’s harrowing and its hard-going and it’s horrendous and you do feel tired afterwards.”

Would you like Chas and Paddy to have a baby? Leave us a comment on our Facebook page @EntertainmentDailyFix and let us know what you think!