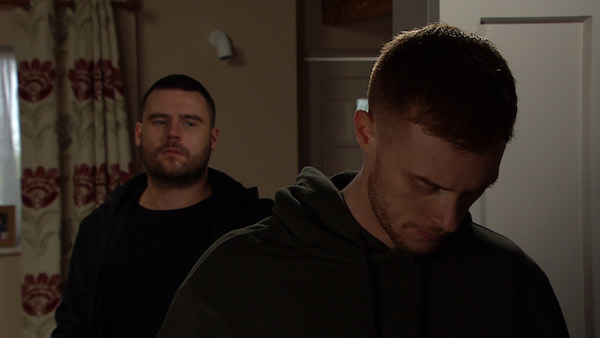 Emmerdale fans convinced Aaron Dingle and Luke Posner will get together

Ever since Aaron’s (soon to be ex) husband Robert Sugden went to prison, Aaron has been missing him terribly and recently has been hooking up with different men.

In last night’s episode of the ITV soap (January 1 2020) Robert’s sister Victoria was in labour, meanwhile Aaron decided to go into town to meet someone at a gay bar.

However, Aaron was stood up and ended up getting into an altercation with another man at the bar.

He was soon thrown out and onto the ground where he landed on his arm, hurting it.

As he was thrown out, Luke was walking by and got Aaron into a taxi before the security guard called a nearby police officer over.

Luke managed to get Aaron to the hospital where a nurse looked at his wrist.

Viewers are convinced Luke will be Aaron’s new love interest and they will get together.

#Emmerdale Oh no, Luke has more chemistry with Aaron than he has with Victoria. Let’s see if they write it

Aaron n Luke going to be an item!! #emmerdale

Is Luke going to be Aaron's new love interest? #emmerdale

Viewers have previously predicted that there will be love triangle between Luke, Aaron and Victoria.

Victoria was raped by Luke’s brother Lee last year resulting in her getting pregnant.

Lee and his mum Wendy harrassed Victoria when they found out about the baby, and Wendy has refused to believe her son was a rapist.

Robert ended up attacking Lee and when he died from his injuries, Robert was given a life sentence in prison for murder.

Before Robert’s sentencing, Victoria met Luke at the hospital but had no idea of his relation to Lee until Robert’s court date.

Aaron and Luke love affair is so going to happen.

Although Luke has made it clear he believes Victoria is telling the truth, Wendy still refuses to believe it and even moved to the village to try to be closer to Vic’s baby.

After Aaron attacked Luke, the hospital worker decided to move away from the village.

In last night’s episode (January 1 2020), after Luke dropped off Aaron he ran into Victoria’s stepmother Diane who had a baby boy balloon.

Later, Wendy got wind that Victoria had given birth and fans are convinced she will kidnap the chef’s newborn son.

What do you think will happen next in this storyline?