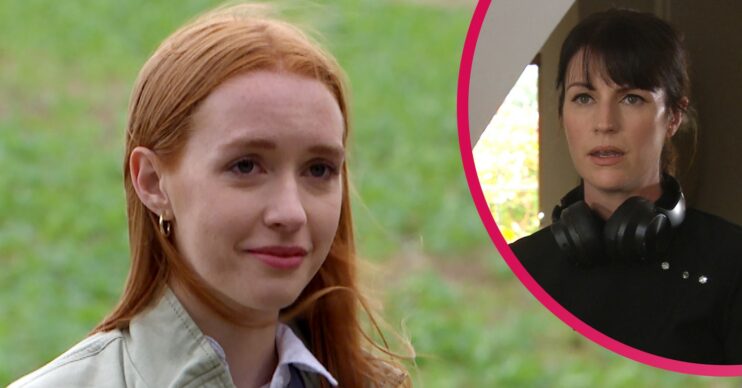 Emmerdale fans confused as ‘abandoned’ storyline is brought up again

Chloe recently found out Noah has been stalking her

This week, Chloe was horrified to find out Noah Dingle had been stalking her. She mentioned how it reminded her of how her dad would have her followed.

But fans are wondering what happened with the storyline involving Chloe’s dad, as viewers saw him on-screen.

Read more: Emmerdale: How old is Chloe? What’s the age difference with Nate?

Last year, Sarah Sugden got in contact with Chloe after finding out she is the sister of her heart donor Gemma.

Gemma died in a car accident and Chloe’s mother died not long later. Meanwhile Chloe’s father Damon was in prison.

Chloe soon started seeing Sarah’s uncle, Noah. When Charity and Mack discovered how rich Chloe was, they broke into her house, hoping to take some valuable items.

That’s when the found out Kerry Wyatt was working for Chloe’s dad, Damon.

Kerry had been keeping an eye out on Chloe as she had no family around.

When Kerry found out Chloe and Noah had been seeing each other, she warned her she needed to stop because if her dad found out he wouldn’t be happy.

Soon Kerry could see how upset Damon’s control was making Chloe and she planned for them to flee.

Fed up, Chloe decided to visit her dad in prison, telling him to stop having her followed and trying to control her life.

Although she appeared to have got through to him, she was shocked when his men dropped her stuff off in the village, having had her kicked out.

Ever since, it appears Chloe has had no contact with her dad and has been living with Kerry and Amy.

Chloe and Noah began dating, but broke up after she slept with Jacob and Noah said some cruel things to her.

Over the last few weeks Noah has been stalking Chloe and this week, she discovered evidence of Noah’s stalking on his laptop.

In last night’s scenes (Wednesday, May 12) Kerry’s daughter Amy found out what Noah had done and offered to talk to Chloe.

Chloe began opening up and told Amy how Noah’s stalking reminded her of how her dad had her followed, filmed and tracked.

She told Noah how her dad’s behaviour ‘messed her up’ and worried she gave him the idea.

However fans were quick to point out how the storyline with Chloe’s dad seemingly just vanished, after weeks of people speculating who her dad could be.

Remember the whole Chloe's dad storyline that just vanished? Maybe now we're finally going to get to find out who he is? #emmerdale

Are we ever going to see Chloe's mysterious dad? 🤔 #Emmerdale

Still don’t know what the point of the whole Chloe’s dad storyline was. #emmerdale

Who is Chloe’s dad and where is he now?

Chloe’s dad is a man named Damon, however he’s never actually been seen.

At the time the storyline was playing out, there were all sorts of theories about who Chloe’s dad could be, including Pierce Harris, due to them sharing the same surname.

But since Chloe’s move to the village, Pierce died in prison and his son, Marcus, arrived. So it’s safe to rule out that theory.

Some fans even predicted that Chloe is really Jean Tate, the daughter of Zoe Tate.

However it has never been revealed if Damon is a past character under a new name, or if he is a character we’ve just never seen.

It is believed Damon is still in prison and Emmerdale hasn’t confirmed if we will ever see him.