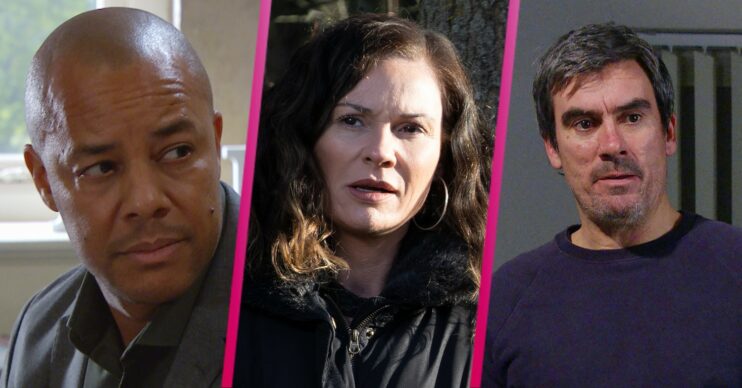 Chas and Cain were involved in a car crash

Emmerdale fans have called out the soap for the ‘unbelievable’ car stunt in last night’s episode (Thursday, May 12) involving Cain, Chas and Al.

Cain and Chas went after Al after he got hold of Noah’s laptop, containing evidence he had been stalking Chloe.

As Al turned onto another road, Cain went to follow and the car ended up rolling over and ended up under a utility pole.

However Emmerdale fans are calling out the ‘unbelievable’ stunt.

This week, Chloe found out that Noah had been stalking her after finding photos of herself on his laptop.

Chloe tried to take the laptop as evidence but Noah managed to hold onto it.

Noah went to the cricket pavilion to try and delete the evidence but soon Al and Cain turned up.

The laptop ended up back in Charity’s possession.

However in last night’s scenes, Amy tricked Charity and managed to get her hands on Noah’s computer.

She gave it to Al who set off in his car, meanwhile Charity realised the laptop was gone and chased after Amy.

In the street, Charity told Cain and Chas what Amy had done and he and Chas set off to try and stop Al.

As they zoomed down a country road, Al turned onto another road.

Cain and Chas soon realised he’d gone another way and Cain did a handbrake turn in the middle of the road.

This resulted in the car turning over multiple times, landing the right way up under a powerline next to a utility pole.

They were both unconscious but soon Al came along and found them.

Chas and Cain woke up. Chas realised her door was jammed and her seatbelt was stuck, but she was more concerned that the utility pole was about to fall onto their wrecked vehicle.

Al came round and told Chas he’d called for help.

He desperately tried to get Chas’s door open and eventually he managed to get it open.

As Chas got out, Cain told her his foot was stuck. Chas begged Al to help her brother.

Cain ordered Chas to go and find help and she ran off.

Despite Al and Cain’s feud, Al tried his best to get Cain out.

He got Cain to bite down on a book while he dislodged his foot from the car.

Chas returned as Al managed to get Cain’s foot free.

As Al dragged Cain from the car, the utility pole fell onto the vehicle and luckily no one was seriously harmed.

However fans called out the unbelievable stunt, pointing out how Chas went from being unconscious one moment, to running the next, and that Cain and Al managed to get far away from the car in a split second.

they were nowhere near getting out of the car yet within 0.2 seconds they manage to move out of the way?? what an anticlimax #emmerdale

So Chas is in a car accident, unconscious and then is able to run. #emmerdale

#emmerdale
Where are the unbelievable, never-been-done-before stunts we were promised?

So nobody died and it wasn't the biggest stunt ever teased? We got rolled in like prime kippers… #Emmerdale

how is Chas not more hurt after that crash? poor writing 🙄 #emmerdale

So the car flipped over qt least five or six times…and Chas walking around the hospital without even 1 scratch on her face?? ….call make-up now!! #Emmerdale

What did you think of the stunt scenes? Leave us a comment on our Facebook page @EntertainmentDailyFix and let us know what you think!