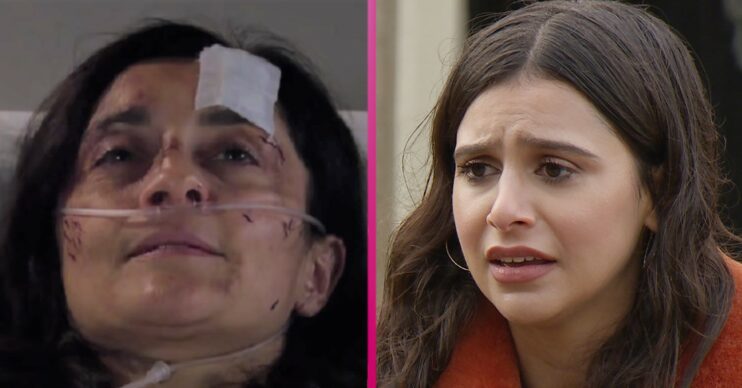 Manpreet got caught up in the Wookpack explosion

Emmerdale fans have all been left asking the same question as Manpreet is discharged from the hospital.

Recently Manpreet started to uncover the truth about her serial killer sister Meena.

When she began to quiz Meena about her plans to get Dawn in trouble and her pregnancy, Meena grew angry and went after Manpreet with a broken glass bottle.

Moments later the Woolpack exploded and both women got caught up in the explosion.

Meena was left with cuts and bruises but Manpreet went into a coma. When she woke up she pretended she had no memory of the events leading up to the explosion.

However when a nurse became concerned about her memory loss, Manpreet hold him she remembered everything about her sister.

In last night’s episode (Tuesday, December 28) Meena told her sister that she was being discharged as she made good progress and she would look after her.

Manpreet wanted to speak to the doctor herself, not feeling ready, but Meena wouldn’t allow it.

Manpreet clearly looked terrified to be going home with her sister, who tried to kill her just days before.

However fans were left questioning why she didn’t ask the nurse to contact the police when she was on her own with him.

Well done inspector Vinny, now we need you to get on the case of #Thewoolpack and the #meenamurders. And why didn’t Manpreet speak to a doctor or ring someone from her hospital bed before she was discharged. I’m losing the will to live with this #meena storyline 😩 #emmerdale

#Emmerdale Why on earth didn't Manpreet tell the doctor to get the police or confide in him when Meena was out of the room?
It was inevitable that Meena would persuade them to free up the bed because she could "take care of Manpreet at home".

True. Also, she wouldn’t have been discharged without seeing a Dr. She could also have banned Meena from her bedside and refused to go home with her. This storyline beyond ridiculous and irritating.. 😠🙄

Meena took Manpreet home and gave her a pill to help her sleep.

Read more: Emmerdale: Is Manpreet dead? What’s next as Meena finds out the truth?

However Manpreet didn’t take the pill and went to reach for the mobile phone in the room, but it was a trap set by Meena to see if Manpreet did remember what happened.

Manpreet then injected her sister with a substance, causing her to fall unconscious.

It has been revealed Meena will hold her sister captive. Will Manpreet manage to get away from her, or will she be Meena’s next victim?