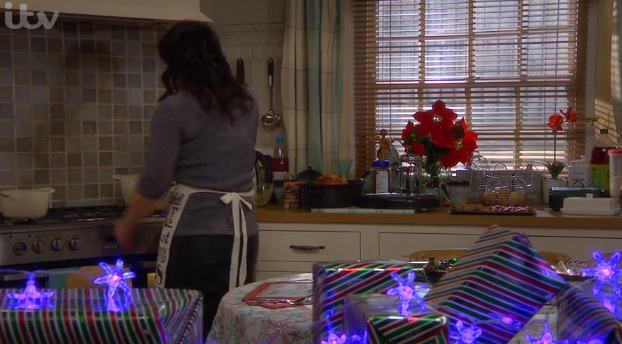 Has all that drink got to her?

It was a day of misery for many residents of Emmerdale village on Christmas Day.

David and Jacob were in for a shock when the discovered a baby on their doorstep, who turned out to be Maya’s son, meaning one of them is the father.

Fireworks went off at Home Farm after Graham read the DNA results and discovered he wasn’t Millie’s father, but he decided to ruin Kim, Andre and Jamie’s day all the same by revealing he could potentially have been.

Marlon and Rhona rowed after he discovered her plans to move to Leo to France.

Cain went off on one when Belle brought his son Nate to the Dingles’ to spend the day with the clan.

And then there was poor Moira. She begged Cain to allow her to see their boys, but he was adamant she wouldn’t get them until Boxing Day.

And then she was dealt another blow. Matty called to say that he wouldn’t be coming home as, wherever he was the weather was bad and he couldn’t get back.

“What, so the trains are off then?” she said.

This had viewers scratching their heads and trains don’t operate in the UK on Christmas Day! How has she got to her forties without realising this?

Some were puzzled about why Matty was trying to get a train.

Why would Matty think there’s trains on Christmas Day? #emmerdale

Matty’s waiting at a train station? It’s Christmas day, there is none 🙄 #Emmerdale

Others had twigged that he was lying, clearly trying to avoid coming home…

It still doesn’t explain how Moira could possibly not know that trains don’t operate. Maybe all that wine is fogging her brain!

Leyla appeared to earlier in the episode when Jacob went off there and she said he couldn’t get anywhere as there were no trains, so Matty had better hope she and his mum don’t exchange small talk about rail services any time soon!