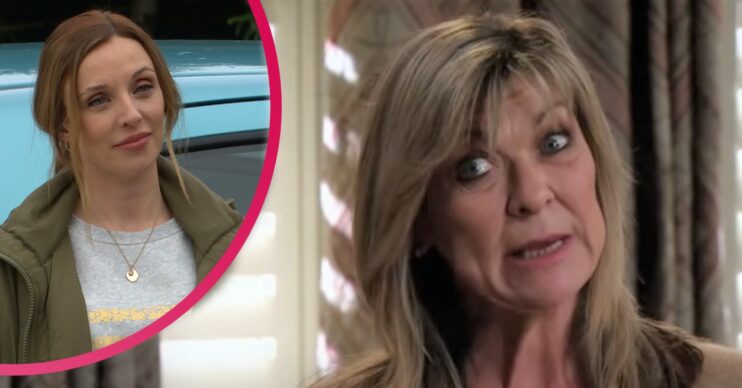 She got into an altercation with Andrea as the two began fighting over the flare gun. This set the gun off, starting a fire in the maze.

Meena then bashed Andrea’s head against the wooden steps in the maze before taking her bracelet and leaving her to die.

This week, police told Andrea’s friend and housemate Wendy that they suspect Andrea was murdered.

Wendy told this to Meena. In last night’s scenes she was questioned by police about what happened in the maze.

She claimed she didn’t see Andrea.

However she told police the day before the fire she witnessed Kim and Andrea arguing over Andrea filing a restraining order against Kim and stopping her from seeing Millie.

The police soon arrived at Home Farm and arrested Kim under suspicion of Andrea’s murder.

However fans were left furious that the police arrested Kim for Andrea’s murder just because Meena said they have an argument.

They also pointed out that Meena’s DNA must have been all over Leanna Cavanagh’s body when Meena murdered her back in July, but the police still ruled her death an accident.

Meena left a ton of DNA on Leanna but got off totally scot-free (For now) Kim nowhere near maze or Andrea arrested cos she supposedly had an argument with her the day before really? Where's the evidence? Surely the Police would at least interview the other witnesses? #Emmerdale

So Meena left a ton of DNA on Leanna but got off…Kim nowhere near maze or Andrea arrested coz she had an argument?!
Oh please..😕#Emmerdale

#Emmerdale wtf so Meena says one thing & the police go straight up & arrest Kim. Hope I'm not the only 1 that thinks this is beyond a bad joke 🤬🙄

why would you arrest kim?
they must know she wasn't in the maze ffs #emmerdale

What happened to Leanna?

Leanna was murdered by Meena after she found out Meena killed her best friend, Nadine Butler.

So Meena left a ton of DNA on Leanna but got off. Kim nowhere near the maze or Andrea but got arrested cause she had an argument.

Meena chased Leanna to the humpback bridge in the village. She then pushed the teenager off and into the stream below.

Her body was discovered the next day by Bernice Blackstock and not long later, her death was ruled an accident.