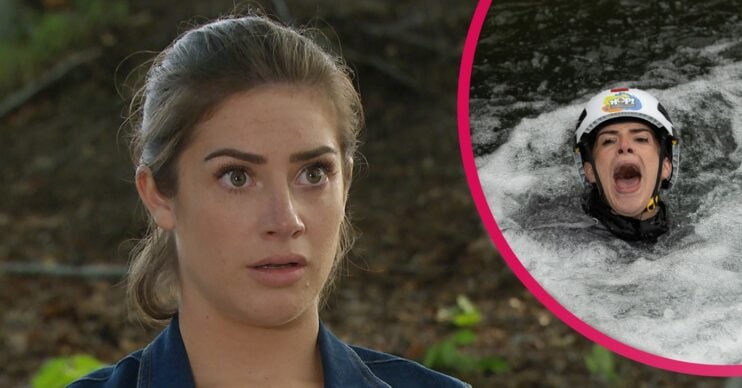 Emmerdale fans beg soap not to kill off Victoria

Is Victoria going to survive?

Emmerdale fans are begging the soap not to kill off Victoria Sugden.

Last week Meena found out her boyfriend David is in love with Victoria and is planning to be with her.

In this week’s scenes Meena, David, Victoria, Manpreet, Charles, Andrea, Mack and Charity set off on the survival challenge.

Meena damaged Victoria’s harness, however she was horrified when her sister Manpreet ended up using the damaged harness to get down the rock face.

Luckily Manpreet made it down without any issues, but Victoria refused to go down the rock as she was terrified of heights.

Later Manpreet, Charles, David and Victoria were all crossing a rope bridge.

Charles turned around and told them there should only be two people on the bridge at a time and Victoria said: “What’s the worse that could happen?”

Emmerdale fans beg soap not to kill of Victoria

In last night’s scenes (Tuesday, October 19) David and Victoria tried to get to safety, but the bridge broke off one end.

David tried to get Victoria to climb up but she refused to leave him. Just a few moments later, they both ended up falling into the river.

They were both dragged along the rocky river, but they were unable to get to safety.

Eventually they managed to grab hold of a rock just before the waterfall. However Victoria ended up slipping out of David’s hands and ended up falling down the waterfall.

Fans are begging the soap not to kill off Victoria, who has been a character on the soap since her birth in March 1994.

Surely they can’t kill victoria off shes the only sugden left! #emmerdale

NO, NOT Victoria too? #emmerdale

Read more: Emmerdale: Will Charles die from sepsis after it’s revealed he hurt his leg?

What do you think of last night’s episode of Emmerdale? Leave us a comment on our Facebook page @EntertainmentDailyFix and let us know what you think!