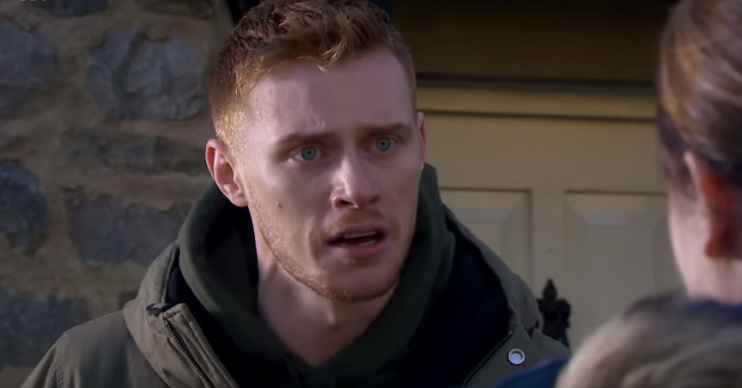 Luke is Lee's brother, but believes he raped Victoria

Fans of Emmerdale have begged Luke Posner not to leave as he announced his plans to depart the village.

Victoria Sugden met Luke at hospital and the pair struck up a friendship, but what she didn’t know at first was that Luke was the brother of Lee, the man who raped her, which resulted in her getting pregnant.

When Victoria was in court for Robert’s sentencing, she saw Luke join Lee’s mum, Wendy in the gallery and he revealed that he’s Wendy’s other son.

Despite Luke saying he believes Lee did rape Victoria, Wendy has accused her of being a liar.

Wendy recently decided to move to the village for her new job at the local doctors and to be close to Victoria’s baby, when it’s born.

Since moving in, Robert’s husband Aaron has tried his best to scare Wendy out of the village by following her around and in last night night’s episode (December 12 2019) he took his plan a step further.

After seeing Wendy leave and drop her bag, Aaron broke into her house to find Luke there alone.

Aaron tried to get Luke to confess that he was covering for Lee, but Luke said would never defend his brother for what he did.

Aaron soon lost his temper and began smashing the house up and was only stopped when he accidentally hurt his sister Liv, who was trying to pull him off Luke.

Later Wendy returned home and in front of Aaron, Victoria and Diane, Luke told her that Lee raped Victoria and unless Wendy admitted she knew what Lee was like, he couldn’t stay.

He told his mum that he was leaving and wanted her to come with him.

Although Luke is Lee’s brother, viewers don’t want him to go.

Wendy I don't care about but I like luke. I don't want him to leave. #Emmerdale

I really like Luke. Such a shame how his character has come about. Hope he stays somehow #Emmerdale

Will Wendy finally admit that her son was a rapist, or will she continue to believe he did nothing wrong?

Do you want Luke to stay? Leave us a comment on our Facebook page @EntertainmentDailyFix and let us know what you think!