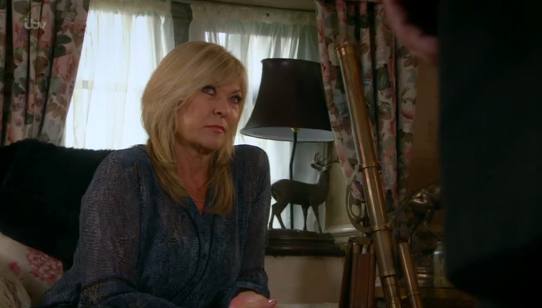 Why is Kim slumming it in the B&B?

Viewers of Emmerdale were convinced they’d missed a scene last night, as they were baffled by Kim Tate’s living conditions.

On Wednesday (November 27), Kim moved from Home Farm to the B&B – but fans were baffled as to why?!

Those watching from home asked themselves if they’d missed an episode of the ITV soap as Kim had appeared to move into the village B&B, without anybody mentioning it.

Why are Kim and that in the B&B? And not Home Farm?

During tense scenes in which Kim tried to force Andrea to tell her husband Jamie about her affair and the truth about Millie’s father – enter Graham, stage left – the trio were sat in the lounge of the B&B.

So why had they moved out of the luxury Home Farm?

One baffled viewer turned to Twitter for answers, asking: “I must have missed an episode or two, but why are Kim and family staying at the B&B? #Emmerdale.”

Another added: “Why are Kim and that in the B&B? And not Home Farm? #Emmerdale.”

Writing on Emmerdale Addicts Facebook fan page, a third asked: “I must have missed an episode… I watched tonight’s episode – how come Kim and family are staying at the B&B?”

Why are Kim and that in the b&b? And not home farm? #Emmerdale @emmerdale

That's what I want to know lol

One replied saying: “We’re all confused.”

“I was going to ask that, I thought I must have fallen asleep through an episode!” laughed another, while one more joked: “It’s all a bit woolly at the moment!”

One viewer suggested that Home Farm “must be in Graham’s name and he has kicked Kim out” but another said: “They have builders at Home Farm – there was a scene where Kim was on the phone to Jamie the other day.”

This was confirmed by another eagle-eyed viewer who said: “They have the builders in at Home Farm.”

We have contacted an Emmerdale spokesperson for clarification.

The Tate living conditions are the least of their worries at the moment, with Millie’s paternity hanging over their heads.

Viewers know that Andrea and Graham had a one-night stand a few years ago, around the time that Millie was conceived.

Graham, understandably, is now convinced that Millie is his daughter.

In upcoming scenes, Kim gets the results of the DNA test revealing who Millie’s real dad is.

But just as she is about to spill the beans, Andrea is rushed to hospital because she fears she’s losing her baby.