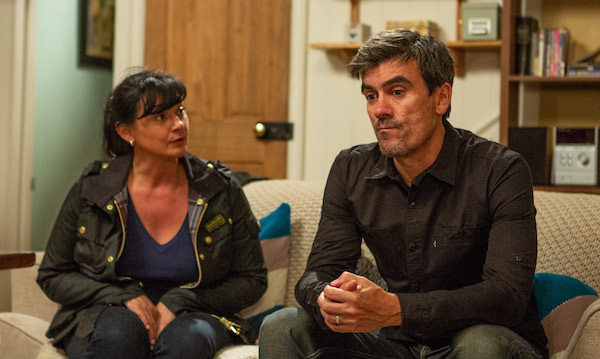 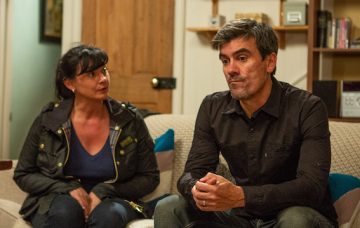 Who would you choose?

Viewers of Emmerdale couldn’t believe what they were seeing last night, when Moira Dingle chose to spend time with her lover over her husband.

In scenes many fans found incredulous on Tuesday night (October 1), ‘mucky’ Moira turned down the offer of a curry and hot bath with her husband Cain Dingle – instead preferring to have sex with Nate Robinson in his caravan.

Continuing what can only be described as a very unpopular storyline, Moira “lied through her teeth” to be with Nate – something those watching from home just couldn’t understand.

Writing on Emmerdale Addicts Facebook group, one fan wrote: “Moira has no appetite for Cain’s curry, but an appetite for sex! I cannot believe she is picking that slimy toad over Cain!”

Another fumed: “OMG Moira, what are you thinking of? Cain offered you a hot bath with him but no you had to go to the caravan to that vile Nate fella… Who would you choose guys? Cain or Nate? I know who I’d choose…”

She continued: “Poor Cain – and Moira lying through her teeth saying she’s coming down with something! Please Emmerdale, get rid of Moira and Nate ASAP. The scene with her going into the caravan and them kissing was vile, disgusting and cringeworthy.”

A third said: “I totally agree… Just too disgusting for words! The man is an ogre.”

“Cain, no questions asked!” said one more. “Nate is vile and creepy.”

You got Cain at home making tea , running a bath and in your bed. And you run to a smelly caravan for a bunk up with the farm hand. True Madness 🤷🏼‍♀️😤🙄 get a grip Moria and go home to your husband, before he finds out and flips out big time, #troublescoming

It’s not the first time Emmerdale fans have slammed Moira for her affair with Nate, with many begging for it to end after the “gratuitous” sex scenes.

And calls for the pair to get their comeuppance will be answered soon, when Pete Barton discovers the truth about their affair.

In scenes which promise to be better than firework night, Cain will also find out about his wife’s affair during the soap’s dramatic October Week. Bring. It. On.

Do you want Moira and Nate’s affair to be exposed? Leave us a comment on our Facebook page @EntertainmentDailyFix and let us know what you think!