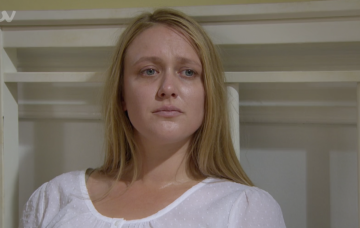 Will we ever be put out of our misery?

It’s been the storyline that has kept fans guessing for months, but just as the Rebecca White plot takes another sinister turn, it seems Emmerdale fans have had enough.

Ever since she was held hostage for weeks in a remote cabin in the woods, soap viewers were left wondering if Rebecca would ever escape her evil nephew’s clutches.

So when she did finally make a run from it, fans rejoiced… only for Lachlan to catch her once again and apparently smother her to death.

But somehow Rebecca managed to avoid death once again, and it was revealed last week that she was in fact still alive and being looked after by a mysterious nurse.

But with Rebecca starting to look like she could survive a nuclear bomb at this point, fans where thrilled last night when it looked like she was about to be set free.

But of course, things aren’t that simple in Emmerdale, and her fate was soon thrown into question once again by the end of the episode, leaving some fans losing the will…

Earlier in the episode Rebecca was relieved when the nurse who had been looking after her up until this point finally believed everything she was saying about her killer nephew.

But just when it looked like she might be getting home other baby boy, her hopes were crushed once again.

Worried about how working for a serial killer would look, the nurse decided to take matters into her own hands and appeared to inject Rebecca with a huge looking syringe.

Meanwhile Robert was visiting Lachlan in prison, desperately trying to get the truth out of him.

But by the time Robert had made it to the random hospital room, Rebecca was nowhere to be seen, with only bloody sheets and an abandoned hospital bed to be found.

But did the nurse kill Rebecca? Or did Rebecca over power the nurse and get away? Are they both dead? Or both alive?

Who knows, this is Emmerdale after all. Anything can happen!

Keep watching this week to find out Rebecca’s fate.

Are you loving or hating this Rebecca storyline? Leave us a comment on our Facebook page @EntertainmentDailyFix and let us know what you think!