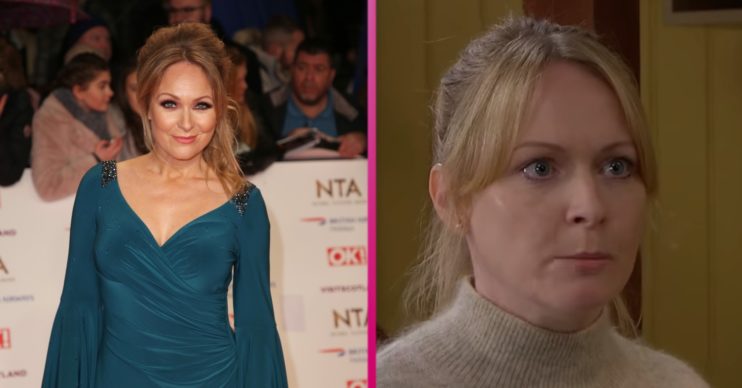 Michelle Hardwick's baby is due in October

In Wednesday’s episode (July 22) Belle and Bob spoke about Vanessa and Charity and how Vanessa’s cancer treatment is going.

Belle confirmed that Charity would be taking Vanessa to her mum’s for a ‘a bit of R’n’ R’ after her chemotherapy.

However this means it’s unlikely Vanessa will appear on-screen until after Michelle has had her baby.

Although fans are overjoyed for the actress, they can’t help but miss Vanessa.

I’m going to miss Vanessa Woodfield even more if I have to endure endless scenes of the increasingly irritating Dan and Amelia. I don’t deserve this, I’m loyal! (And cute)#Emmerdale

Michelle announced that she is pregnant with her first child with her wife, soap producer Kate Brooks.

The actress revealed their baby is due in October.

Although Vanessa is currently in the middle of a bowel cancer storyline, she hasn’t been seen on-screen for some time.

Filming was halted back in March due to the coronavirus pandemic. Although Emmerdale was the first UK soap to get back to work, it’s unlikely Michelle would have returned, as she is pregnant.

But while Vanessa may be off-screen, it seems Charity will be keeping herself busy as she tries to track down Vanessa’s ex-boyfriend Kirin.

With Vanessa having treatment for her cancer, she wanted to make sure her son Johnny is looked after, should the worst happen.

Together Vanessa and Charity decided it would be best for Charity to adopt Johnny.

However Charity came across an issue when she realised she would need the permission of Johnny’s dad, Kirin.

But Kirin is currently on the run from the police after he killed Tess Harris in a hit and run in 2016.

Next week, Priya calls Kirin sister and both Charity and Sarah listen into the conversation. What will they learn?