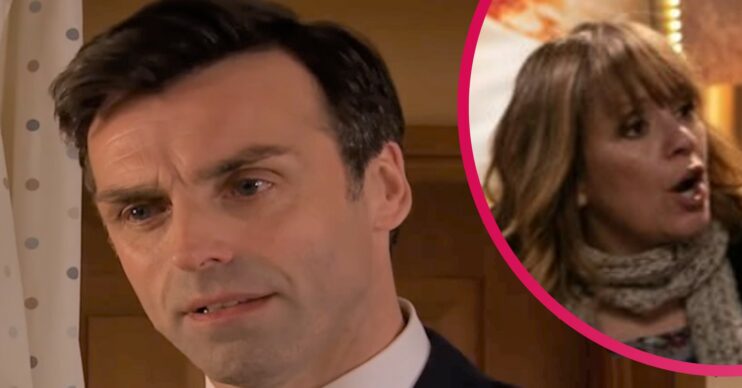 Emmerdale fans all saying the same thing about Pierce’s ‘return’

Emmerdale’s Rhona Goskirk has been through a huge amount at the hands of Pierce Harris and when he made a shocking comeback into her life last night fans were not happy about it.

In fact, they’ve been left calling out the scriptwriters and storyliners over being unoriginal and giving Rhona nothing else to do.

Does she deserve better than revisiting this storyline yet again?

Read more: Emmerdale spoilers: Dawn in fight for her life at her hen do

Why is Pierce back in Emmerdale?

Pierce wrote to Rhona from prison to reveal he is dying.

He also told her he has a son, who he wants her to help him find before he dies.

Rhona is completely torn over what to do.

Vanessa is strongly against Rhona getting involved, but after phoning the prison and getting confirmation Pierce is really dying, Rhona makes her decision.

She starts to search for Marcus on social media and ropes Ryan in to help.

Marcus will turn up later in the week, but is Rhona opening a whole dangerous can of worms?

Should she really be getting involved with the devil once again? Surely anything to do with Pierce can only mean one thing: heartbreak.

What are viewers saying about Rhona and Pierce’s ‘return’ in Emmerdale?

Fans aren’t impressed that Pierce is being brought up again.

They have suggested Rhona deserves a different storyline rather than Pierce returning over and over again.

resurrecting Pierce just to get his son on #Emmerdale is ridiculous.
I can see it now…
Rhona finds the son who visits Pierce & ends up gunning for Rhona & Vanessa for putting his dad in prison
the writers are so lazy.
so many loose ends going on & THIS is what they do

Is bringing Pierce’s illness into the equation the only thing producers could think of to give Rhona a storyline? #Emmerdale

Pierce should’ve been left in 2020 #emmerdale

Yay, dragging pierce out, yet again. It’s almost as if the writers can’t think of anything else to do with bland little rhona #emmerdale

I love how when they’re wondering what story to give Rhona they always go back to Pierce. #emmerdale

Please tell me they are not about to release Pierce from prison again?! #Emmerdale pic.twitter.com/4r7WD3kaWx

Because rinse and repeat is all the lazy writers are capable of, not once are the backstories considered, just plough on and treat the viewers with contempt.

Really have you got no other stories so we have to drag pierce back up.

When was Pierce last on screen in Emmerdale?

Pierce was last seen in 2o20 when he was unmasked as the killer of Graham Foster, Rhona’s new boyfriend.

Once Graham was out of the way and Pierce had set Marlon up for the crime, he also kidnapped Vanessa and her son Johnny.

He used them to lure Rhona to meet him, but the brave vet managed to trick him into confessing to Graham’s murder while she live-streamed his words to the Free Marlon website.

And as if that wasn’t enough, Rhona then managed to inject him with a bull tranquiliser and watched as he slumped to the ground just as the police arrived.

Pierce was arrested and eventually he was back behind bars serving life for kidnap and murder.

Read more: Emmerdale spoilers in all-new pics for next week

Who is Pierce’s son?

It turns out Pierce has a son called Marcus, played by Darcy Grey.

Marcus will arrive in the village this week believing he is meeting Rhona.

But in fact, Vanessa has interfered and tricked Marcus into meeting with her. She tells him to go away, but Rhona catches them together and realises what’s going on.

But is Marcus a chip off the old block? Or nothing like his rapist, murderer father?

Speaking about his character, Darcy has said: “For Marcus, the battle of being torn between wanting to forget his relationship with his Dad but also ultimately, wanting to simply be loved is a challenge many of us face, and one that I hope I can bring some truth to.

“He is such an open book, with such an uncertain future that I just can’t wait for you all to see where his journey in the village takes him!”

Is he about to bring more heartache to Rhona in Emmerdale?

Should Rhona help Pierce in Emmerdale? Leave us a comment on our Facebook page @EntertainmentDailyFix and let us know what you think!