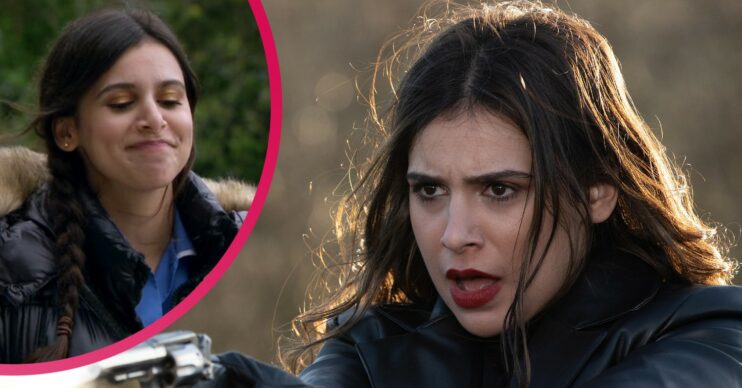 Emmerdale fans all saying the same thing about Meena’s return

Meena had some hilarious one-liners

Emmerdale fans have all been saying the same thing about Meena‘s return.

Last week it was revealed Meena is back in the village to get revenge on Billy and Dawn.

In tonight’s episode (Tuesday, February 15) Meena took Billy and Dawn to a remote viaduct, planning to get her revenge on the couple.

She told Billy he had to make a decision – either save himself or Dawn and if he didn’t choose, she would kill them both.

However fans were distracted with Meena’s wit and ‘hilarious’ lines throughout the scenes.

When Dawn asked Meena why she was doing this she said: “I know, anyone in their right mind would never have come back. I really am my own worst enemy.”

Dawn soon began to wind Meena up calling her pathetic and Meena pointed the gun at her.

When Dawn said it wasn’t the first time she had a gun pointed in her face, Meena went: “Oh tell me more. You know sometimes you actually start to become interesting.”

Her one-liners continued throughout the episode.

Emmerdale fans all saying the same thing about Meena’s return

Read more: What else has Emmerdale star Dean Andrews been in and is he married?

After Meena shot Leyla, Dawn asked if she could go and see if she’s okay and Meena sarcastically said: “She’s not okay Dawn I just shot her, please keep up.”

Later Billy tried to convince Meena that they could run away together and one again, Meena delivered another hilarious comment, telling him: “I’m unhinged Billy, I’m not stupid.”

The one liners today have been epic 🤣🤣 #emmerdale #PaigeSandhu #meena

Meena is the best character in @emmerdale for years! Played absolutely brilliantly by Paige Sandhu. Vile and hilarious at the same time, proper psycho!! #emmerdale #meena

Okay but paige sandhu plays meena so incredibly well, she’s a phenomenal actress. She seriously needs to be cast in horrors movies #emmerdale

Meena is just so funny 😭 #emmerdale

😂 😂 Meena is amazing there is no denying that #emmerdale #meena

Meena is the best character in @emmerdale for years! Played absolutely brilliantly by Paige Sandhu. Vile and hilarious at the same time, proper psycho!! #emmerdale #meena

The episode ended revealing Harriet had been attacked by Meena and was unconscious and on the floor bleeding, but will she be okay?

Read more: Who is Emmerdale star Roxy Shahidi married to? How many children do they have?