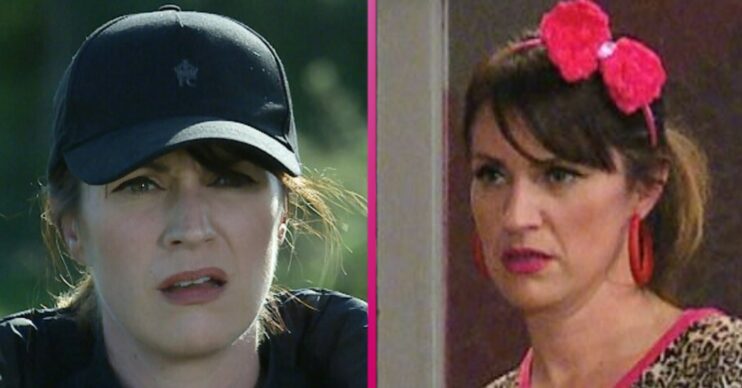 Emmerdale viewers have been left confused over Kerry Wyatt‘s village comeback and feel like the soap has ‘forgotten’ to finish her return storyline.

When Kerry came back to Emmerdale after a year away, we saw her as housekeeper for a gangster who was in prison.

However, she’s suddenly back working at the salon and having lunch with Chloe like nothing ever happened. Fans are definitely confused!

Read more: Emmerdale fans shocked at cost of beauty treatments in the salon

What happened when Kerry came back to Emmerdale?

Kerry came bursting back on to screens at the end of October. She was working in the house of Chloe Harris, the sister of Sarah Sugden‘s heart donor.

Chloe’s dad, it turned out was a very, very bad man and not someone you wanted to cross. He’s supposedly a big gangster who’s currently banged-up for all his bad deeds.

However, even though he’s in prison, he was still managing to control Chloe and she had had enough of it. She attempted to run away with Noah Dingle, but Kerry and Charity caught them and brought them back home.

Kerry couldn’t bear to see Chloe so unhappy though and decided to help her. They planned to escape together, but Kerry’s daughter, Amy Wyatt, wasn’t happy about it. Chloe, not wanting to come between mother and daughter, then took matters into her own hands.

Back in November, she went to see her dad in prison and told him to stop controlling her. She then reported back that her gangster dad had told her he wanted what was best for her and promised to leave her alone.

But despite her feeling good for standing up to him, it all came crashing down when he quite literally took her at her word.

His henchman drove through the village and barely even stopped the car before dumping Chloe’s clothes in bin bags at her feet.

We saw Kerry a week later being questioned by Brenda over why she was back and who Chloe was. But Kerry merely told her: “I’ve got my reasons Brenda, but we don’t need everybody knowing my business, do we?”

This week when Kerry was looking for work and Mandy agreed to give her her job back at the salon. It appears she and Chloe are now living at Victoria’s house with Amy.

Has the gangster plot been dropped?

Fans are confused as to why there’s been no mention of the gangster plot.

Kerry has seemingly just picked her old life back up – and her old clothes! – like nothing has happened.

One wrote: “So is that Kerry over her dodgy gangster moll bit and now straight back into her old life?”

Why is that girl living in #emmerdale with Kerry?

Why aren’t they still living in that huge mansion?

They’ve just created a random plotline out of nothing.

So has this gangster just given up on his daughter and kerry even tho they are literally just down the road??#emmerdale

Why is Kerry working at the salon after the cleaning at the house storyline with Chloe hasn’t finished? Who’s Chloe’s dad? Made out like he was a former resident? Who are the writers to this that can’t seem to finish a storyline? #emmerdale

so have they dropped the whole gangster plot with kerry then? #Emmerdale

Has Kerry forgotten about Amelia in Emmerdale?

Viewers are also concerned Kerry has forgotten about Amelia.

Kerry was engaged to Dan Spencer, Amelia’s dad, and although that relationship didn’t work out, Kerry was like a mother to Amelia.

It seems odd the pair have not reunited since Kerry has been back in the village and fans have picked up on it.

Has Kerry forgotten about Kyle or Amelia? 🤔#Emmerdale

Kerry seems to have forgotten about Amelia and Dan!! #Emmerdale

Odd not to see Kerry reuniting with Amelia… #Emmerdale

Has Kerry seen Amelia yet #Emmerdale

Perhaps all of this and more will be explained in 2022… We’re certainly still waiting to find out exactly who Chloe’s dad is. And why Kerry feels so protective of Chloe – is she her daughter?

And maybe Kerry will finally even pay for killing Frank?