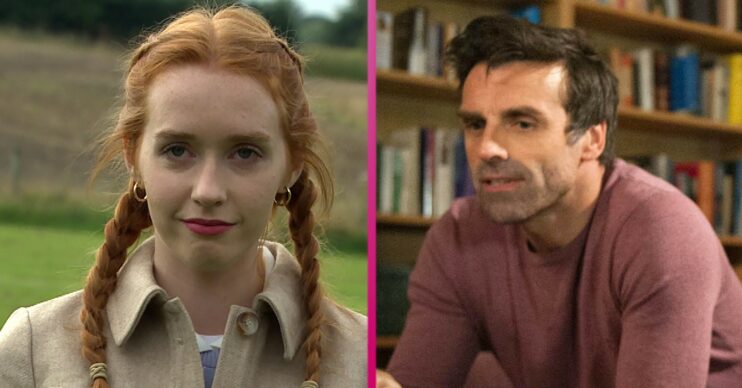 Emmerdale newcomer Chloe Harris has really got under the skin of some viewers.

In fact, many don’t buy Chloe’s story about being the sister of Sarah Sugden’s heart donor, and think she’s someone else entirely…

And one eagle-eyed fan has picked up on a connection to a past Emmerdale villain: she shares a surname with one Pierce Harris.

Is Chloe in Emmerdale related to Pierce Harris?

Pointing out the possible connection on Twitter, the viewer shared their theory: “Chloe’s last name is Harris. Any relation to Pierce?”

#Emmerdale Chloe’s last name is Harris. Any relation to Pierce?

Although one other user responded: “Surely not?”, some were thrilled by the theory and declared it “interesting”.

Could Chloe and Pierce really be related? If so, how? And why would he send her to Emmerdale?

Who was Pierce Harris?

Pierce Harris came to the village after his wife, Tess, was killed in a car crash.

Tess had been having an affair with Paddy Kirk, and Pierce then grew close to Paddy’s estranged wife, Rhona Goskirk.

Pierce and Rhona eventually married, but it was soon revealed Pierce was not a nice man at all.

He repeatedly raped Rhona, and after a vicious sexual assault on their wedding day, Rhona worked up the courage to go to the police.

Pierce was sent to prison in 2017, but he was released in 2020 and returned to the village to make Rhona’s life a misery.

Rhona managed to record and live stream Pierce confessing to Graham’s murder and he was arrested once again.

With Pierce languishing in prison, could his daughter Chloe have been visiting him to plot revenge against everyone in the Dales?

Emmerdale: Who is Chloe Harris?

Chloe arrived in Emmerdale last month after Sarah Sugden tracked down the family of the heart she received.

Claiming to be Gemma’s sister, Chloe bonded with Sarah, has gifted her expensive jewellery, and told her more about the person whose heart Sarah has.

Chloe confessed Gemma like girls and was rejected by her best friend just before she died, but many viewers watching think Chloe is in fact the best friend and she was in love with Gemma, not the other way round.

The newcomer has been very secretive about her family, only saying her parents don’t like her talking about Gemma as it’s too painful.

But what if it’s because a key member of her family is in prison?

Could Pierce have had a secret family before Rhona and Tess? Two daughters from a first marriage, maybe? Or perhaps he’s Chloe’s uncle and has worked out her connection to the village?

Is Pierce Harris coming back to Emmerdale?

Pierce’s previous return was kept shrouded in secrecy and was only revealed on screen the night he bludgeoned Graham to death.

Emmerdale are known for their surprises, so nothing is off the table when it comes to possibilities.

Could Pierce really be returning? And just what does he want with the Dingles if he is?