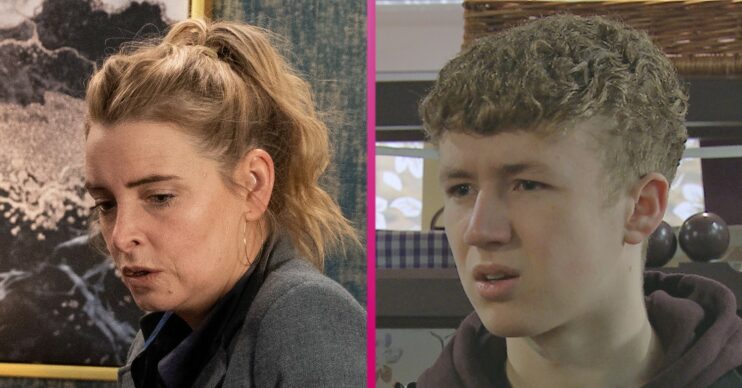 Emmerdale fans were left enraged after Charity tried to defend Noah after his stalking was exposed in last night’s episode (Tuesday, May 10 2022).

Chloe finally found out Noah had been stalking her for weeks. When she confronted him, Noah tried to stop her leaving his house and cover Chloe’s mouth.

Charity walked in and was horrified by what she saw. However fans were furious she later tried to protect Noah.

Read more: Who is Charity Dingle in Emmerdale, how many times has she been married and how many children does she have?

For weeks Noah has been stalking Chloe by tracking her phone, taking pictures of her using a drone, breaking into her bedroom and even putting a microphone in her room.

When Noah put Chloe’s journal in Jacob’s rucksack, she assumed Jacob had broke into her room.

But this week Chloe found the pictures on Noah’s laptop,

In last night’s Emmerdale scenes Chloe confronted Noah and he tried to defend his actions.

When Chloe tried to take his laptop and leave, he pushed her to the ground.

Noah then got on the floor yelling at Chloe: “Why can’t you just listen to me?”

He then tried to cover her mouth as she tried to yell for help.

Moments later, Noah’s mother Charity walked in and was appalled by what she was seeing.

She screamed at her son to let Chloe go.

Chloe was understandably very shaken and Noah explained how Chloe tried to steal his laptop.

However Chloe told Charity why she tried to take it, and exposed Noah’s creepy behaviour.

Noah told Chloe he loved her but she warned him to stay away.

Later Charity approached Chloe and asked if they could all sit down and talk about things.

However Chloe didn’t want to, admitting she was scared of Noah.

Chloe ran off to the cafe, finding Kerry and Al. Charity found her and tried to talk to Chloe again, but Kerry, Al and Bob were all concerned about what Noah had done.

Chloe told Kerry and Al how she found evidence Noah had been stalking her.

When she said he suspected Noah had a drone which he’d been using to take pictures, Bob confirmed he’d seen Noah with a drone.

Chloe explained she tried to bring Kerry the laptop with the evidence but Noah tried to stop her.

Charity then stepped in saying her son isn’t a monster and he’s still a kid.

When Charity told them Noah is “an immature, mixed-up, stupid teenage idiot”, Al was quick to point out Noah is 18 and classed as an adult.

Kerry pointed out Noah’s behaviour is not okay at any age and he also raided Gabby’s knicker drawer.

When Kerry talked about reporting Noah, Charity said: “I’m his mum, yeah, he’s my responsibility, let me talk to him.”

Charity continued to beg Chloe not to call the police as Noah packed his stuff.

However fans were enraged that Charity would defend her son’s creepy behaviour, especially as she has been in a similar situation to Chloe.

Al is right – Noah is 18 an adult. Charity cannot defend Noah for this #Emmerdale

It was SO good when Charity walked in on Noah & Chloe. EA smashed it & I'm happy they showed her so angry. BUT, later trying to excuse his behavior was abhorrent. She's a rape survivor. Yes, she's conflicted cuz it's her son, but that should make her even more angry. #Emmerdale

Interesting how in soaps, parents say about their children or child who has committed and/or about to commit a crime still say they're just a kid even though they're now adults…..#charity #Noah #chloe #Emmerdale #ITV pic.twitter.com/N07UMiCVE4

Yes Charity you are a daft mare, your Son Noah, is totally messed-up when it comes to the opposite sex. How he thought this would end up well is beyond me. #emmerdale