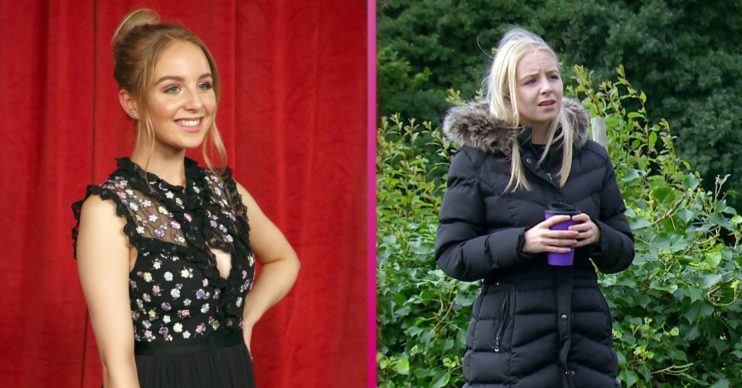 Currently Belle is at war with her ex-boyfriend Jamie after she reported him to the police for the hit and run and Moira. However Jamie is trying to pin the blame on Belle and her nephew Nate.

Next week Belle, who began struggling with her mental health in 2014, agrees to work one last shift at the vets with Jamie. But when she switches two vials of veterinary drugs in Jamie’s bag, he catches her.

And before Jamie and Paddy have a chance to fire her, she quits her job.

Overwhelmed, she starts to hear voices, one which belongs to her mum Lisa Dingle, who died last year. And the voices try to convince her that Jamie’s ex-wife Andrea is to blame for everything going wrong.

Emmerdale: What did Eden say about Belle’s mental health?

Eden, who has played Belle since 2005, has spoke about revisiting the storyline.

The actress said: “There’s the stress of the situation and Belle hasn’t really got anyone there for her, especially when she was pretending to love Jamie – she felt very alone.

“Even though the Dingles have now forgiven her for what she did, she still feels cast out.

“Belle’s mental health isn’t great and it’s taken a turn. Nobody is really there to see it happening or prevent it. Belle starts to spiral.”

Talking about the voices that Belle will start to hear, Eden said: “At first it’s her mum – she thinks she can hear Lisa. Belle finds that massively comforting. I don’t think she really realises that she’s ill. Because it’s her mum, she just thinks it’s great.

“Then her mum says she has to get revenge and that it’s all about getting her own back. Belle starts to do things that aren’t right and aren’t Belle. She doesn’t understand why her mum wants her to do those things.

“Because it’s her mum, she trusts it and goes with it. That’s when it becomes serious.”

Eden also admitted that if Belle went to prison for Moira’s hit and run, she’s “not sure how she’d get out there intact.”

She added: “Obviously Belle has been in prison before and that’s why the psychosis developed. I can’t imagine she’d cope well at all. She is more fragile.”