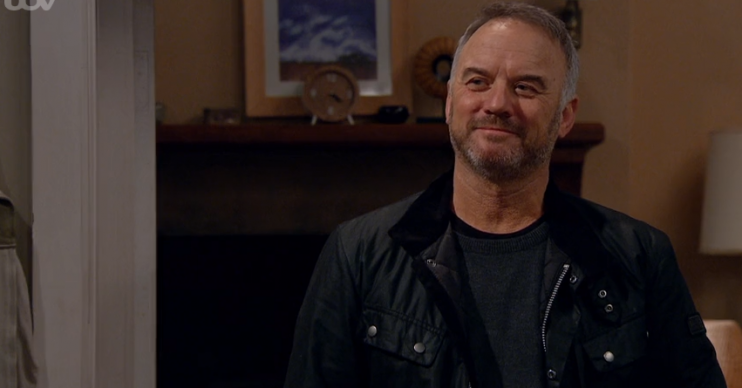 Cain discovered this that DI Malone is not a good cop

Earlier this week, Cain discovered his employee Will had been hiding drugs for Malone in the garage. Will explained that Malone is a bent copper and is top dog in a gang Will was previously involved with.

To make things worse, Malone knows that Cain was the one who shot Nate Robinson, and the gun used actually belongs to Malone.

In last night’s episode, Cain met up with the dodgy detective and despite Will’s warnings not to upset Malone, Cain told the detective to keep away.

Malone is vile killing that bull.

But when Cain returned to the village, his garage had been broken into and he quickly received a call from his soon-to-be ex-wife Moira, who said her bull Bertie had been killed.

Moira called the police and one of the officers even claimed he’d never seen anything like it in his years on the job, meaning poor Bertie must’ve been brutally murdered.

Soon Malone turned up and once he was alone with Cain, Malone looked at little Isaac and said to Cain: “Nice little lad you’ve got.”

When Cain warned him to back off, Malone continued saying: “If you do remember anyone you might have upset I’d make amends, before things get really out of hand.”

Viewers were disgusted that Malone would kill an innocent animal and threaten a toddler.

Malone such a smug sod needs bringing down!! #Emmerdale

Malone is a crafty copper! #emmerdale

Malone's another one who deserves a painful death #Emmerdale

Not liking the new bent copper storyline. Who wants to hear about massacred bulls on a family show. #Emmerdale

Yesterday on Lorraine (Wednesday, March 11) DI Malone actor Mark Womack admitted his wife Samantha, who played Ronnie Mitchell in EastEnders on and off from 2007 until 2017, teased him over his role in the ITV soap.

He said: “She just takes the mickey out of me because I’m terrible at learning lines.

“She just said ‘Learn the lines, don’t knock anything over, just get on with it.’ ”

What do you think of DI Malone?