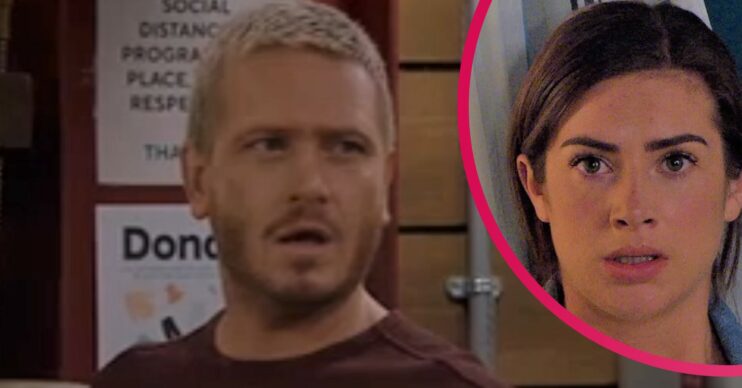 He's back, but where is she?

Emmerdale viewers have been left totally baffled as David returned to screens less than 24 hours since he said he was leaving.

However, by Thursday’s episodes (February 24) David was back and said he’d actually returned the night before!

But where was Victoria?

Why did David and Victoria leave Emmerdale?

After being shown footage of Meena trying to drown her, Victoria was understandably freaked out.

She was so upset and frightened at the thought she could have been killed and also terrified Meena might be released on bail and come back for her.

So David suggested they go to London until Meena was officially behind bars.

They left with their kids, Harry and Theo, but Jacob stayed behind. Not wanting to be alone, Jacob asked Chloe to spend the night with him.

Fans were confused as to why they were going away again only weeks after returning from a three-month holiday to Portugal.

One said: “David and Victoria have only just come back!”

“Victoria and David have left again???” another queried.

But their confusion was nothing compared to that of last night when David was happily working in the shop again.

When did David return to Emmerdale?

“Hello, he rises at last,” David said to Jacob as he entered the shop.

“What time did you get back?” Jacob asked.

“About 10.30,” David said before making a fuss about Jacob not saying ‘welcome home’ and ‘how was London’.

Bit rich given he’d only been gone one night!

Jacob then revealed David had walked straight back into drama and confessed what had happened with Chloe.

As David tried to talk to Jake about the situation, the teen stormed out.

And that was the end of David’s return scene.

Fans were quick to hit social media to air their thoughts on his quick comeback.

One wrote: “why is David back again already?”

That was a very quick holiday David 🤔😂#Emmerdale

There was no mention, nor sight, of Victoria. Has she returned too?

Is she just upstairs with the kids, staying out of sight?

Given she was the intended target, and the one who was scared, could she have stayed away longer? After all, Meena is just on remand at the moment, she hasn’t actually been convicted of anything…

Why were Isabel Hodgins and Matthew Wolfenden off-screen for so long?

Reports suggested there had been an an alleged race row leading actor Aaron Anthony to quit the role of Ellis.

Aaron was said to have been annoyed about the reported behaviour of his two Emmerdale colleagues.

The Sun claims that the verbal altercation was over a comment made. It also alleged there was mimicking of a mixed-race co-star’s accent.

The source said: “We have been told that Aaron brought this up with Matthew subsequently. There was a tense conversation between them. Matthew and Isabel stopped filming afterwards.

Neither has publicly commented on the situation, however.

At the time a spokesperson for Emmerdale told ED!

Matthew and Isabel return to filming

The pair were written out of the soap following the incident but recently returned to screens.

In their Emmerdale comeback scenes David and Vic explained they had been stuck in Portugal as Theo had an ear infection. This meant he was unable to fly until it had cleared up.

On their return, the couple announced their intention to move in together and be a proper family.

But will Meena spoil their happy ever after?