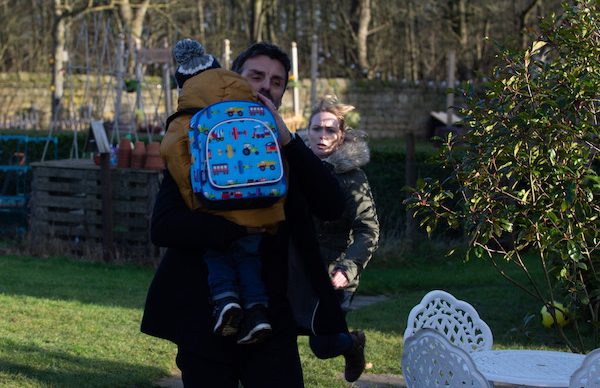 Johnny has been kidnapped with his mum Vanessa

Worried fans of Emmerdale can breathe a sigh of relief as the soap has confirmed that Johnny will survive Pierce Harris’ murder threat.

On Friday night Pierce convinced Vanessa – and viewers – that he was about to kill the youngster as punishment for his hostage Vanessa trying to escape.

She has been tied up in the kitchen of one of the empty cottages in the village while the rest of the village think she’s in France for a holiday with her son.

Vanessa desperately tried to escape Pierce but instead of summoning help to free her and her son, she tried to fight him – with him winning and her remaining captive.

She was dragged back into the kitchen and chained to the oven – before Pierce revealed she would have to pay for trying to escape – and hinted he was about to kill Johnny.

He told her: “The trouble is I can’t believe a word you say and I did warn you not to try anything else.

“I was trying to be a nice guy, you just wouldn’t let me. And now I’ve got to do this. It’s all your fault – you’re making me do this.”

She told him: “You touch one hair on that boy’s head and I will end you.”

He walked off upstairs as Johnny shouted for his mummy and ominously picked up the baby monitor and said: “Hey champ. Let’s just turn this off, shall we??”

Vanessa began sobbing for her son, convinced he was about to be murdered – and fans agreed with one saying: “NOT Johnny!”

A third said: “The bit where Pierce said he was gonna hurt Johnny and the monitor being switched off was horrific. Way to far.”

But now the soap has confirmed that Johnny survives Pierce’s vileness – at least for now – and he will use the boy to control Vanessa into helping his deluded plan to win back ex Rhona.

He will use the baby monitor and access to Johnny to keep Vanessa doing his bidding and to stop her from escaping – but what sick plans does he have for Rhona?

Do you think the Pierce storyline has gone too far? Leave us a comment on our Facebook page @EntertainmentDailyFix and let us know what you think!