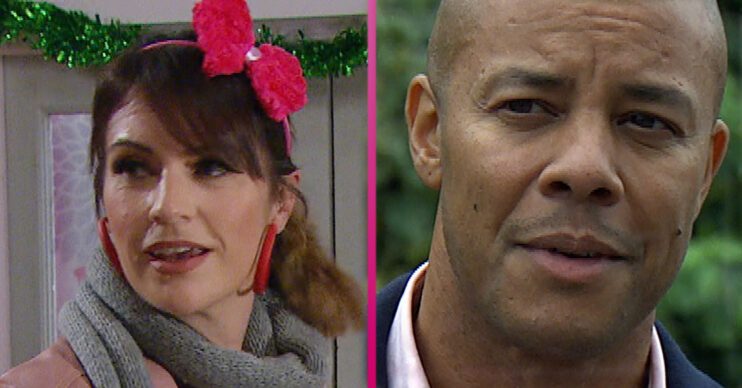 Should she beware and steer clear of the businessman?

Could there be an unexpected romance on the cards for Kerry and Al this festive season on Emmerdale?

Kerry has definitely been a bit strapped for cash since she recently returned to the village.

So who knows, maybe the size of the businessman’s wallet has caught the eye of the beautician!

Coming-up on the ITV soap, flirty sparks fly between Kerry and Al.

It’s not long before the pair are engaging in some shameless flirting.

Which does not impress pub chef Marlon Dingle, who knows businessman Al is not to be trusted.

But maybe Kerry is either unaware or prepared to turn a blind eye to Al’s crafty behaviour and terrible track record with the women of Emmerdale Village?

Al is trying to put The Woolpack out of business

Al became an investor in struggling village pub The Woolpack a while back.

But it’s all part of a plan to get the pub shutdown.

Al and a bunch of developers want to knock down the iconic landmark and build a block of luxury apartments instead!

Pub co-owners Chas Dingle and her cousin, Marlon are most definitely onto Al.

But that doesn’t seem to be stopping him from playing dirty and attempting to sabotage Christmas business at The Woolpack.

In fact, it all gets a bit heated when Chas’s brother Cain catches Al up to no good again.

Cain confronts Al outside the pub and risks getting himself arrested!

Read more: Which Emmerdale character will be serial killer Meena’s next victim?

Al is a terrible love cheat!

Maybe Kerry is just looking for a bit of festive fun with Al.

But she had better watch out as he definitely has a wandering eye.

While she was away from the village last Christmas, it was revealed that Al was cheating on his fianceé, Priya Sharma with a mystery woman.

That woman turned out to be none other than Cain and Charity Dingle’s daughter, Debbie!

However, when Debbie and Priya discovered they were both being played by Al, the ladies teamed-up for some good old-fashioned, humiliating revenge.