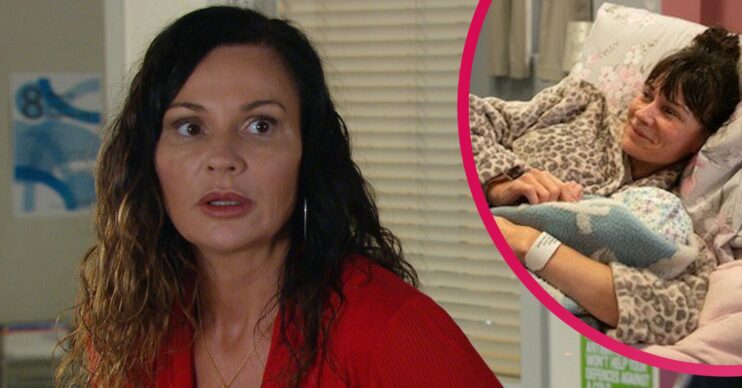 Emmerdale: What happened to Chas Dingle’s baby Grace? How many children does she have?

And is the doting Dingle mum a murderer?

Chas Dingle in Emmerdale is one of the show’s most iconic characters. Part of the legendary Dingle family, she’s also the landlady of the village pub, The Woolpack, and has been at the heart of many of the soap’s most dramatic stories.

Chas is the daughter of Faith and Shadrach Dingle, and Cain Dingle’s half-sister. She also had a half-sister called Genesis – known as Gennie.

So who is she, how many times has she been married, and who was her daughter, Grace?

Chastity – known as Chas – Dingle arrived in Emmerdale in 2002. dressed as a nun. She’d been hired as a stripper by her dad, for cousin Marlon’s stag do – slightly odd, even for the Dingle family!

Chas had been married to her teenage sweetheart Gordon Livesy and had a son, Aaron. But she’d allowed Gordon custody and Aaron resented his mum for it.

She settled into the village and got together with Carl King. The pair had a very rocky relationship, and eventually Chas was heartbroken when she discovered Carl was cheating on her with Eve Jenson.

But on the advice of cousin Charity, Chas went along with her wedding plans and humiliated Carl by jilting him at the altar.

That wasn’t the end of Chas Dingle in Emmerdale’s dealings with Carl King.

In 2012, Chas – who’d bought into the Woolpack with money she’d taken from Carl to pay for their fake wedding – began an affair with Debbie Dingle’s boyfriend Cameron Murray. They couldn’t keep away from each other, despite Chas trying to distract herself by getting together with Dan Spencer and proposing to him after just a few dates.

Carl found out about Chas and Cameron and blackmailed Chas into giving his money back. But when she went to hand over the money, he confessed he still loved her.

Chas went ahead with marrying Dan, but she decided to run away on their wedding day. As she got ready to leave, Carl appeared.

He tried to rape poor Chas and she whacked him over the head with a brick in a panic. Carl died – though not because of Chas. He was actually a victim of Emmerdale serial killer Cameron. Chas thought she’d killed Carl and stood trial for his murder. But Chas was found not guilty and returned to the village.

Killer Cameron was on the rampage through the village, but Chas – who was now in a relationship with the Dales murderer – was unaware. And she was also in the dark that he was now cheating on her with Debbie.

Cameron killed Chas’s half-sister Gennie, who’d found out the truth about his murderous instincts, and then in some of the most dramatic scenes in Emmerdale ever, took the customers at the Woolpack hostage.

Chas and Debbie ended up trapped in the flooded cellar of the pub, in the dark, not knowing where Cameron was lurking. But thankfully they both escaped with their lives, while Mr Murray was electrocuted.

Chas wasn’t the best mum when she first arrived in Emmerdale. Her relationship with Aaron was rocky to say the least and when the teenager came to visit, he was always in trouble and causing problems for his mum.

But the pair eventually got back on track and Chas supported her son through his acceptance of his sexuality and the death of his boyfriend, Jackson.

In 2016, Chas was heartbroken when Aaron revealed he’d been raped by his dad Gordon. Furious with her ex, Chas confronted Gordon who at first tried to make out that Aaron had been abused by someone else. But eventually, he confessed, leaving Chas devastated.

Chas stood by Aaron in court, as he faced Gordon, and gave evidence herself. Gordon was found guilty and later died in prison, and Aaron changed his surname to Dingle.

Who was Chas’s daughter, Grace?

Way back when Chas first came to Emmerdale, she and Paddy fell in love. But Chas cheated on him with Carl King and they eventually split up.

But in 2017, Chas and Paddy got back together and this time it was for keeps. They were delighted when Chas found out she was unexpectedly pregnant.

Who is Chas married to in Emmerdale?

At Christmas 2020, Chas was surprised when Paddy announced he had planned a wedding. Poor Paddy had pulled out all the stops for a festive ceremony but had forgotten to invite any guests!

And when he heart Chas ranting about Christmas weddings, he decided to cancel.

Luckily, Chas got wind of the plans and in the end it was Paddy who was surprised by the wedding!

And the icing on the wedding cake for the cute couple was when Paddy announced he’d be taking Chas’s name and they were now Mr and Mrs Dingle!

Are Paddy and Chas going to live happily ever after?