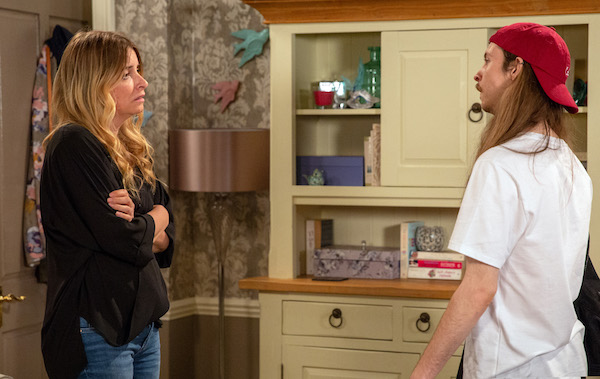 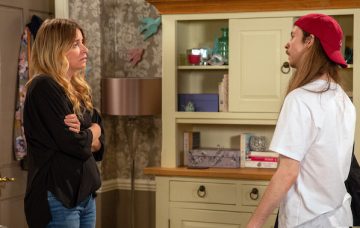 Charity's trying to move on, but Ryan has other plans...

With DI Mark Bails finally behind bars after terrorising Charity Dingle for years, the pub landlady has been trying to get on with her life.

Although his guilty verdict didn’t bring the closure she so desperately hoped for, at least she knows she never has to see his slimy, evil face again.

Viewers know that Charity was abused and manipulated by corrupt cop Bails when she was most vulnerable.

He groomed and raped her when she was just a teenager, and called her a liar when she tried to expose him.

Charity became pregnant by Bails and gave birth to Ryan – who now wants to get to know his other half-siblings.

And it’s more than Charity needs right now, as she’s struggling to cope with her demons.

In moving scenes during the evening’s episode, Ryan told his shocked mum: “I need to talk to you about something, me and mum have been talking a lot and I want to see Molly and Luke.

“Because they’re my family. I’ve already spoken to Chloe about it. It’s not the kid’s fault – they didn’t pick their dad.”

Understandably, Charity reacted badly to Ryan’s request and shut him down, telling him: “Absolutely no way, I won’t allow it. He tried to get under your skin before.”

She raged: “I really wish I never had to hear that man’s name mentioned anymore, and I will if you shackle yourself to his poxy family.

“You need to pick a side and decide what really matters.”

The encounter left Charity shaken and upset – proving that, despite being sentenced to 30 years in prison, Bails will always leave a dark shadow over her life.

Some fans were Team Charity, with one writing: “Can’t watch yet, but it makes me sad to read Ryan’s not behaving in his usual sterling fashion.”

Charity you’re a mess but I love you! #emmerdale #vanity pic.twitter.com/YRckKJHfxu

Another wrote: “No ryan thats bang out of order stop hurting charity.”

Many others saw Ryan’s point of view, with one tweeting: “Found it an interesting route to go down that Ryan wants to know his half siblings on Bails side. Understood Charity’s reaction but the kids can’t help who their father is like he can’t.”

Another typed: “I can see the argument from both sides.”

A third added: “Charity needs to realise that Ryan is not her. She can’t expect him to feel the same way about Bails’ children. They’re innocent and they’re his family too.”

If Ryan wants to see his brother/sister then that's up to him. Not Charity #Emmerdale

Don’t let Charity intimidate you Ryan. You do what’s best for you. You’ve managed for 27 years without her inflicting her issues on you. It’s not the fault of Bail’s children no more than it was yours.#emmerdale

Charity needs to realise that Ryan is not her. She can't expect him to feel the same way about Bails' children. They're innocent and they're his family too #Emmerdale

Reading comments on #Emmerdale found it an interesting route to go down that Ryan wants to know his half siblings on Bails side. Understood Charity's reaction but the kids can't help who their father is like he cant.

@emmerdale @jamesmooreactor Here's a hug for James because Ryan got yelled at by Charity. I can see the argument from both sides. pic.twitter.com/EkaU0vUThW

In upcoming scenes, she continues to drink herself into oblivion with tragic consequences.

She later decides to track down her dad, who rejected her when she was young, for answers.

Do you think Ryan has a right to have a relationship with his half-siblings? Leave us a comment on our Facebook page @EntertainmentDailyFix and let us know what you think!