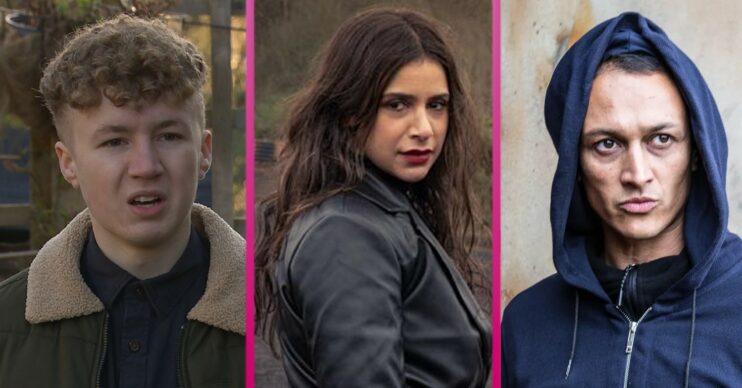 These lot don't know the meaning of the word 'restraint'

Emmerdale is packed full of over-the-top characters and that’s why we love it.

However, the village has one or two people who just don’t know when to stop – even when the universe is practically screaming at them.

Here are some of Emmerdale‘s worst culprits…

How many times does Noah Dingle have to be rejected before he listens?

It’s not so much that he’s an incel with seriously disturbing issues, but he just doesn’t know when to quit.

And now he’s proving it by stalking and terrorising his ex Chloe Harris with all manner of technological trickery.

It’s uncomfortable to watch and we don’t understand why it’s being allowed to go on this much.

Nothing quite says sane like kidnapping someone you feel has slighted you and locking them in a shipping container in a field.

If kidnapping wasn’t bad enough – this was an un-plumbed shipping container.

Charity and a bucket, we’ll say no more.

It was a massive overreaction for Charity’s bit of duplicity with his estranged ex.

Meena murdering half the village

Some would say Meena didn’t take things far enough with her murder spree.

With the exception of Andrea Tate, her victims were all drips who wouldn’t have made an impact in the village even if they were strapped to a crashing jumbo jet.

But she did rather get carried away with the whole escaping and then returning to terrorise Dawn and Billy.

She didn’t even kill them. But still, there’s always the 50th coming up…

But you could sort of understand why he killed blackmailer – and also killer – Carl King.

You can even understand why he killed his own friend Alex Moss – who wants to be exposed as a killer?

Read more: Emmerdale: Is it the end for Leyla and Liam after she lashes out?

But to kill Gennie was just over-kill – literally.

And the fact he did it under Debbie’s nose – even after she knew about him killing Carl – it was just a lot.

Meena would never, etc. Well… except she probably would have.