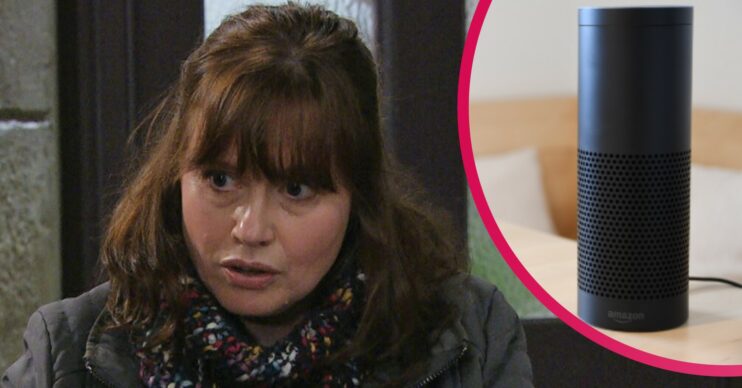 The scene caused Alexas across the country to go off, leaving fans in hysterics!

How did Lydia makes Alexa go off in Emmerdale?

Lydia was stalking Will Taylor, trying to find out if he was cheating on Kim Tate with Bernice Blackstock.

She followed him into the shop, but when Eric asked what she was after, she had to think quickly and announced she was making a Christmas cake for Kim.

Grabbing some ingredients, she then decided it might be quite nice to actually make the cake, so she headed home and asked Alexa how to do it.

“Alexa, what are the ingredients for Christmas cake?” she asked, at which point viewers with an Alexa themselves noticed it go off!

Lydia spoke to the device again when Kim returned home and Lydia told it: “Alexa, stop.”

What happened to fans’ Alexa devices?

Viewers at home immediately took to Twitter to say their Alexas had offered them the ingredients for Christmas cake too.

Some said theirs were just waiting for further instruction.

I wonder how many Alexas responded to Lydia on #Emmerdale

Thanks for the cake ingredients off Alexa 🤭

Why was Lydia following Will?

Lydia had overheard a conversation between Will and Bernice about feelings and assumed they’d been having an affair.

She told Kim, who didn’t seem worried, but Lydia has taken it upon herself to put a tail on Will to keep tabs on him.

In the end she overheard him on the phone sorting out Kim’s Christmas present, which made her believe Will really does love Kim.

However, she still resolved to follow Bernice tomorrow just to make sure!

Read more: Emmerdale fans beg Cain to sort out Al as he tries to ruin the Woolpack

What’s happening to Lydia this Christmas in Emmerdale?

Lydia is currently staying with Marlon and Rhona after her marriage to Sam Dingle broke down.

Lydia reported what she knew about Liv Flaherty to the police, including the footage of a violent fight between Liv and Ben on Ben’s phone. In calling the cops, Lydia broke the so-called Dingle code and was ousted from the family.

However, Sam has realised he’s made a massive mistake and is desperate to win her back.

Wanting to unite the family, Mandy agrees to help this Christmas.

Sam goes all out to plan the perfect Christmas Day and make it a time to remember.

But will Lydia be won over?