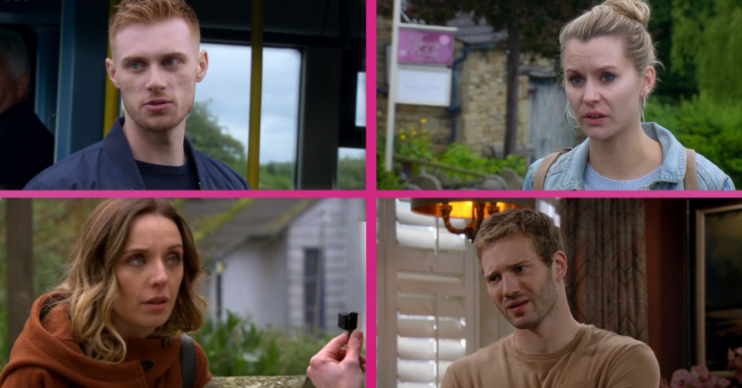 The Emmerdale cast have enjoyed a social-distanced drink at a pub.

Max Parker, who plays Luke Posner on the ITV soap, uploaded a picture to Instagram showing himself and his co-stars in a pub garden.

In the photo Max could be seen with Alexander Lincoln, who plays Jamie Tate, Olivia Bromley, who plays Dawn Taylor, Aaron Anthony, who plays Ellis Chapman.

Emmerdale fans loved seeing the cast hang out together outside of work.

A second commented: “Wish I was at that pub.”

But despite characters having to keep two metres apart, it hasn’t stopped the drama.

A couple of weeks ago, the show did a hit and run, which saw Jamie run over Moira Dingle.

Meanwhile it was revealed in June that there will be a social distanced murder.

John Whiston, the Managing Director of Continuing Drama and Head of ITV North explained that someone would be killed off.

In Monday’s episode (August 17) of the soap, Harriet ended up hitting dodgy Detective Inspector Malone over the head in order the protect Dawn.

After Harriet attacked Malone, he was left unconscious. When he came to, Dawn shot him. TWICE! So he’s definitely dead now…

She wanted to call the police but Harriet said they had to keep it quirt and bury him.

Have you been for social-distanced drinks at the pub with your friends? Leave us a comment on our Facebook page @EntertainmentDailyFix and let us know what you think of this story