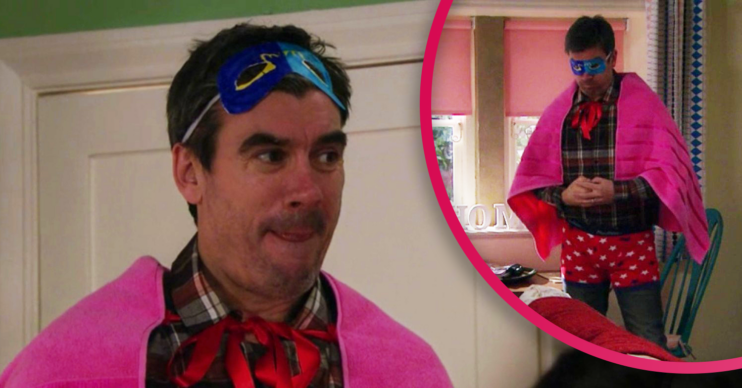 Emmerdale: Cain Dingle leaves fans in hysterics as he dresses up as a superhero

Cain was thoroughly stitched up by his son

Cain Dingle left Emmerdale  in hysterics last night after the hard man dressed up as a superhero.

In last night’s episode Cain (actor Jeff Hordley) was desperate to make things up with his young son Kyle.

The youngster cut contact with his dad after being scared during Cain’s violent outburst over Al Chapman.

And last night Cain convinced his son to give him another chance.

What happened with Cain Dingle on Emmerdale?

While the rest of the village was concerned with serial killer Meena Jutla’s return, Cain and Kyle enjoyed a bonding experience.

Cain was keen to reassure him and promised his son he would do anything he wants to make him happy.

Unfortunately for Cain, Kyle’s idea of fun wasn’t his.

And Kyle decided they should dress up as superheroes for the day and go outside.

Kyle had his dad wear a superhero mask, a towel fashioned into a cape and some bright red boxers – over his jeans.

And then Kyle demanded his dad take him to the shop to buy some sweets – in full costume.

Cain was humiliated but quickly realised Kyle was winding him up.

Taking it in good humour, Cain bought his son all the sweets he wanted – and made sure David Metcalfe didn’t utter a word about his costume.

How did soap fans react?

Emmerdale fans were in hysterics at the scenes.

One said: “Cain dressed as a Superhero has made my night @ emmerdale @HordleyJeff”

A second said: “Cain’s hard man look has just gone straight out of the window #emmerdale.”

Another said: “Cain dressed as a superhero. Dear god.”

A fourth said: “Well it was worth tuning #Emmerdale on #Cainthepinksuperhero,” a fifth shared.

A fifth added: “Hahahaha never thought I would see Cain in a superhero costume.”