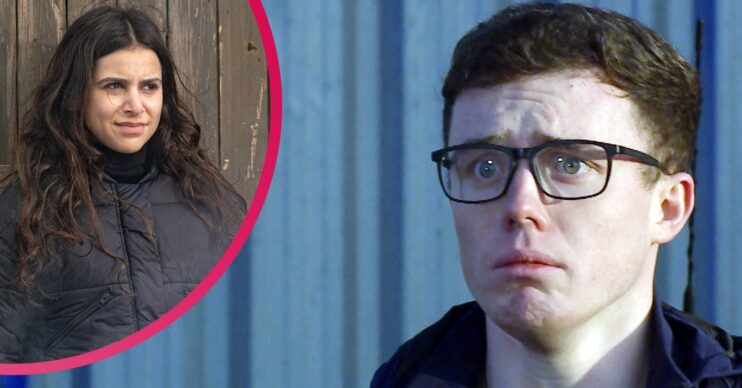 Emmerdale: Bradley Johnson hints Vinny will die after being captured by Meena

Bradley's character Vinny is in danger

Emmerdale star Bradley Johnson has hinted his character Vinny will die after being captured by serial killer Meena Jutla.

Meena has murdered four people and is currently holding her sister Manpreet captive in a barn, as she knows about her sister’s crimes.

Meanwhile Vinny put together a board to try and prove Liv didn’t kill Ben Tucker.

Meena started to realise he was getting closer to the truth and when Vinny followed her to the barn and found Manpreet, Meena knocked him unconscious.

Today (Monday, January 10) Bradley Johnson, who plays Vinny, appeared on Lorraine to talk about the storyline and revealed that Vinny is in danger.

Host Lorraine told Vinny last time she spoke to an Emmerdale actor whose character was in danger of Meena, it was Simon Lennon, who played Ben Tucker, and Ben was killed off in November.

Bradley responded saying: “Who knows. Anybody who is in the capable hands of Meena is definitely in danger so we’ll have to see this week if Vinny can make it out or if he’s one of Meena’s victims.”

Anybody who is in the capable hands of Meena is definitely in danger.

Bradley talks about I’m A Celebrity

Lorraine went on to talk to Bradley about I’m A Celebrity after his co-star Danny Miller was crowned king of the jungle and asked whether he would like to do the show.

Bradley said: “That would be amazing. There’s two shows that I’ve always said I’d love to do, prior to even being in Emmerdale, Dancing On Ice and I’m A Celeb.

“I shouldn’t say this on TV, I’m petrified of spiders, but I think it would conquer my fear of that.

“I’d love to go over to Australia and do that. I think it would be amazing. Following in Danny’s footsteps, they’re big shoes to fill.”