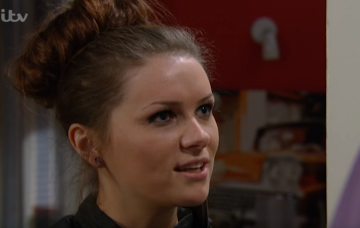 Chelsea won't be returning as Amy

While the team is delighted with newcomer Natalie Ann Jamieson – who will be stepping in as the rebellious youngster – Kate Brooks has admitted they did want Chelsea to reprise the role she played for three years until 2013.

Speaking to the Metro, boss Kate explained that “other commitments” prevented the actress from making a return to the ITV soap.

However, she heaped praise on incoming star Natalie, describing her as “absolutely brilliant” and pointing to the show’s track record of recasting.

She said: “We’ve done it [recasting a character] before.

“We did it with Robert Sugden and it worked a charm, so we’ve got every confidence that she’s going to be a really successful character and that people will fall in love with the character of Amy and her relationships with Pollard and Kerry. That’s who they love.”

Viewers last saw Amy in 2013 when she fled the village to live in Northern Ireland, leaving her son Kyle in the care of his father Cain Dingle (Jeff Hoardsley).

The young mother had put her baby up for adoption but kidnapped him following the death of his adoptive parents and went on the run, before returning him to his biological dad and going on the run to avoid prison.

Show stalwarts Marlon Dingle (Marc Charnock) and Paddy Kirk (Dominic Brunt) will appear in special episodes set in Belfast, where they will come face-to-face with Amy.

Read More: Emmerdale to do a zombie Halloween special?

Chelsea – who recently left Casualty after four years in the medical drama – had previously insisted a return to Emmerdale would be “pointless” for her career at the moment.

She explained: “No, I’m not – I’m definitely not. There would be no point in leaving one long-running show to go back to the one you were in before. There are other things in my career that I’d like to do. For now, it’s a ‘no’. ”

Are you looking forward to Amy’s return? Leave us a comment on our Facebook page @EntertainmentDailyFix and let us know what you think!