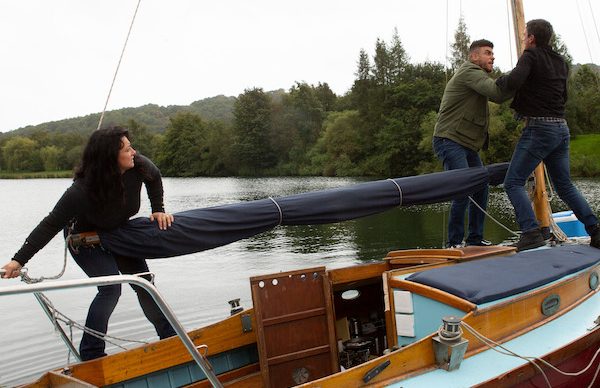 It was last seen being set on fire on the cobbles

Viewers watching Emmerdale are going to see something very familiar later this week in the boat explosion.

When Cain Dingle takes cheating wife Moira and her bit of fluff Nate Robinson on a boat ride, fans should look carefully as Emmerdale boss Jane Hudson has revealed it featured on Corrie last year.

The boat in question is the same boat that Carla Connor bought Peter Barlow to sail away from the cobbles.

It too caught fire after a sleepwalking Roy Cropper knocked over a lit lantern on its side.

The boat was engulfed in flames with Peter’s son Simon trapped inside unable to escape the smoke-filled vessel.

Peter had to effect a daring rescue, climbing up onto the factory before throwing himself onto the boat to save his son.

No-one died in the boat fire on Corrie but could history repeat itself in Emmerdale? Or will someone perish?

Producer Jane told the Sun’s TV Mag: “This is a story we’ve been working on since last July when I joined Emmerdale. We’ve added to it, changed it and made it more exciting.

“There are secrets going to be revealed on the boat and our audience won’t have guessed all of them.

“So it’s going to be explosive in more ways than one!

Fans have long speculated about who farmhand Nate really is after he arrived in the village and set about seducing Moira.

Theories ranging from Cain Dingle’s son to a villain hired by Kim Tate to destroy Cain’s marriage have whipped around social media.

There have even been suggestions he is Faith Dingle’s son, though she would probably remember giving birth again.