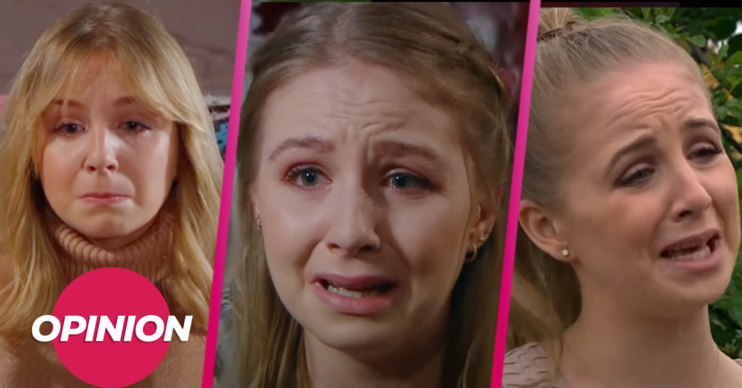 Emmerdale: ‘Belle Dingle needs to quit being a blubbering mess about boyfriends’

Emmerdale is currently showing the aftermath of Belle and Jamie’s affair reveal – the latest of her boyfriends to turn out a wrong un.

However, as fans know, Bell and he can’t be together as Jamie’s wife Andrea is threatening to go to the police about him running over Moira, if he leaves her.

So of course, Jamie has to pretend to still want to be with Andrea so he doesn’t have to face the law.

But this situation has left Belle confused as she has no idea Jamie was responsible for what happened to Moira and simply believes he no longer wants to be with her.

In last night’s episode (Wednesday, July 22) we saw Belle refuse to have a drink with the vet before heading back home.

She believe that he no longer loves her and instead wants to be with Andrea.

Read More: Kelvin Fletcher ‘gets goosebumps’ as he returns to Emmerdale set

Belle later discussed her poor choice in men with her brother Sam and sister-in-law Lydia. However it seems to be the only thing she is focused on.

While it’s easier said than done to tell someone to ‘just get over it’, it seems as if her main focus is always on men. And let’s face it, it always ends badly and with poor Belle being miserable.

And I am far from being the only one…

Just get over it Belle 🙄 #Emmerdale

Unfortunately for Belle, she doesn’t have a good track record when it comes to previous partners.

As a teenager she dated Sean Spencer. However things became complicated when she discovered he got her best friend Gemma pregnant.

Belle’s other main boyfriends include Jermaine Bailey and Lachlan White.

Belle began dating Jermaine when she was 17, however it all ended in disaster when she discovered he was married. This led to Belle having another breakdown and being sectioned.

She later dated Lachlan, who turned out to be a serial killer. He tried to kidnap her so they could run off together. But she managed to escape his clutches and he went to prison.

Kirin also killed someone – Tess Harris. After running her over and leaving her for dead, Kirin went on the run leaving the village in 2016.

Emmerdale: What next for Belle?

In Emmerdale, Jamie’s cowardly behaviour is enough to drive anyone up the wall and he needs to own up to what he did.

He should take responsibility for his actions. This way Andrea will have nothing to blackmail him.

Although Jamie will probably end up in prison, at least Belle will know the real reason why he went back to Andrea.

Hopefully Belle will be able to move on from Jamie. Let’s face it, Jamie is rather selfish and only concerned about himself. Belle deserves better!