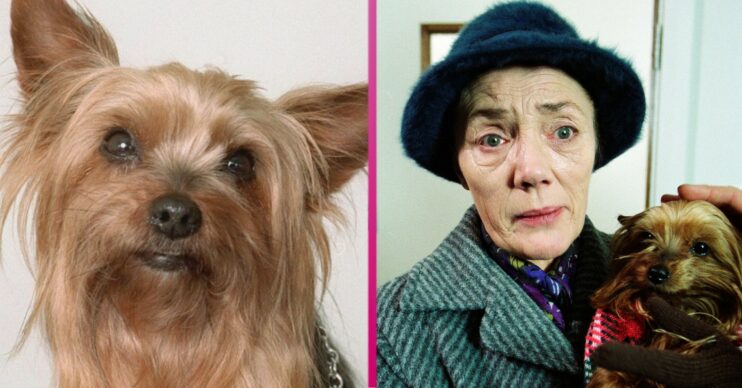 How did Emmerdale dog Batley die? The tragic scene was award-winning

Emmerdale dog Batley was beloved by his owner Edna Birch and by millions of viewers.

So much so that when he heartbreakingly died it earned the pooch a British Soap Award.

The scenes have just aired on ITV3’s Classic Emmerdale repeats and they have broken fans’ hearts all over again.

What happened to Emmerdale‘s Batley?

Who was Batley in Emmerdale?

Batley was Edna Birch’s dog and companion. She was utterly devoted to him.

Batley was a Yorkshire Terrier.

He was played by animal actor Bracken, who was actually a female dog.

How did Batley die?

Eve was the daughter of Edna’s son, Peter. Peter was actually the biological child of Edna’s sister, Lily Butterfield, but Edna and her husband Harold adopted and raised him.

Peter married and had daughter Eve, but her mother died when she was young.

He and Eve had moved to France, but when he began going through a difficult patch with new wife Jacqueline, he sent Eve to live with Edna to do her A Levels.

Eve was a wild child, stealing Marc Reynolds from Donna Windsor and orchestrating the lies and cover-up over a hit and run which killed the teens’ teacher.

Eventually, Eve also had a hand in Batley’s death.

Batley hadn’t been himself so Edna took him to see vet Paddy Kirk who found the dog had a lump on his liver.

Paddy later confirmed Batley had received a sharp blow to the stomach.

Eve admitted she had kicked Batley.

After Eve’s confession, Edna threw her out and sent her to live with Lily.

It was too late for Batley though.

Edna at first didn’t listen to Paddy’s advice to have Batley put down. But when she realised how poorly her pet was, she agreed it was the kindest choice.

In heartbreaking scenes, Batley was put to sleep on February 11 2002.

Edna held him in her arms as he died and told Paddy: “He’s the best.”

ITV3 repeats of Classic Emmerdale air every week day afternoon and we have just reached February 2002.

As Edna said goodbye to her beloved Batley once again on Wednesday June 22, fans were once again in tears.

“Award-winning Batley exit,” wrote one accompanied by a sobbing emoji.

“Good job I work at home, I am sobbing at my desk right now just grabbed my cat for a cuddle. I remember being 16 the first time I saw those scenes and I was whinging back then too, god poor Edna,” said someone else.

Another added: “Sobbing, please tell me I am not the only one?”

“My heart hurts,” added one more.

“Ye olde Edna was a lot more awful than I remember her being, but this Batley story is still every bit as sad,” said a fourth.

A fifth agreed: “This scene is so sad. Anyone who has had to do this with their pet will relate.”

“Aw Batley and Edna, so true to anyone who’s ever lost their best friend,” said someone else.

One more commenter added: “Aww that was heartbreaking Edna and Batley.”

The moment that Batley died was so emotional viewers across the country – then and now – collectively sobbed.

And it won Bracken and Shirley Stelfox, who played Edna, a British Soap Award.

Batley’s death was nominated in the Best Exit category at the 2002 ceremony and was announced as the winner by Graham Norton.

Shirley accompanied Bracken on stage to accept the gong.

What happened to Edna Birch?

Edna grieved for Batley hard, but found some solace in new dog Tootsie. Tootsie’s owner had died and she was given to Edna to care for instead.

Tragedy struck when Tootsie was diagnosed with spleen cancer in 2012. Edna poured her life savings into chemotherapy for her, and Tootsie survived.

But it took its toll on Edna’s health as she was unable to afford heating or food in order to pay for the treatment.

In 2016 Edna herself was diagnosed with ovarian cancer. She didn’t want anyone to know so said she was going to stay with her sister to take care of her.

Edna died the same year with Ashley and Lily by her side.

In real life, Shirley Stelfox was also diagnosed with terminal cancer, dying four weeks after her diagnosis on December 7, 2015.

Leave us a comment on our Facebook page @EntertainmentDailyFix and let us know what you thought of seeing Emmerdale dog Batley die!