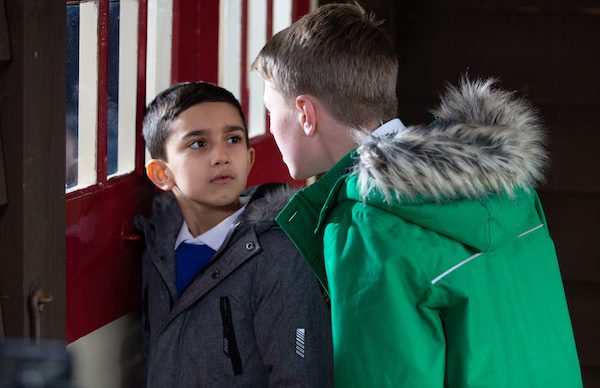 The behaviour hasn't been dealt with

Arthur Thomas will step up his bullying campaign against Archie Breckle in upsetting scenes to air over the coming weeks in Emmerdale.

Viewers know Laurel’s son has been subjecting poor Archie to both physical and verbal attacks ever since he arrived in the village after the death of his mum.

Jealous of the attention he’s been getting, Arthur has punched Archie, left him unconscious, called him names and even bullied him into running away.

In a shocking twist, Arthur even pointed the finger at Jimmy, blaming him for the bruises that had appeared on Archie’s body.

Viewers have been devastated by the scenes and begged for the abuse to end.

Read more: Emmerdale SPOILERS: Vinny’s past to finally be explored

After Laurel and Arthur heard the sad news that Sandy had died, Arthur confessed the truth about his behaviour – but “hypocrite” Laurel decided to cover it up.

And on Tuesday (March 10), Laurel continued to lie to boyfriend Jai about Arthur’s actions – even as she had a conversation with Jai about honesty.

Talking about the challenges they are facing with Jai having only just come out of rehab, he promised Laurel he would be honest from now on if he felt like he was going to relapse.

However, as he called for total honesty in their relationship, Laurel looked sheepish, knowing she was hiding a huge secret from Jai.

But the truth will out eventually, especially as Arthur’s campaign against Archie returns with a vengeance by Monday (March 16).

Will Laurel continue to bury her head in the sand over the possibility that Arthur has bigger issues that need to be addressed?

And is she putting Archie at risk by failing to address the Arthur situation properly?

Do you think Laurel is to blame for handling the situation badly? Leave us a comment on our Facebook page @EntertainmentDailyFix and let us know what you think!