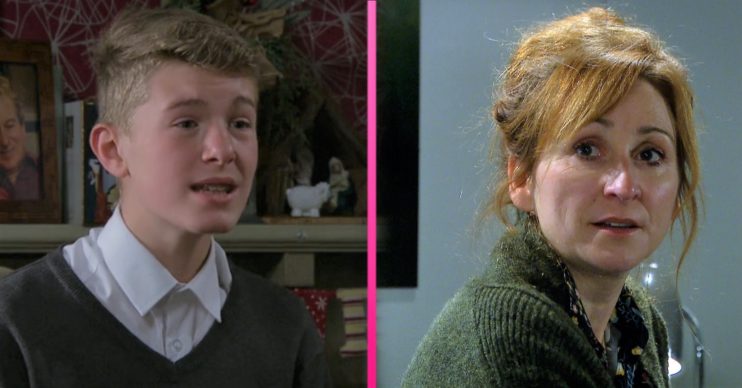 Laurel has decided to end her pregnancy

Emmerdale fans were left heartbroken when Arthur Thomas blamed himself for his mum’s decision to have a termination in last night’s episode (Monday, December 14).

Recently Laurel discovered she is pregnant with her and Jai’s first child together.

At first the couple were thrilled to find out they were going to be parents again. However at their first scan it became clear all was not how it should be.

The couple were offered a CVS test which revealed their unborn child has Down’s Syndrome.

After multiple discussions, the couple came to the sad decision to terminate the pregnancy.

However, Laurel’s stepdaughter Gabby and son Arthur found out about the baby. And Jai convinced her she needed to be honest with them.

In last night’s scenes, she sat her children down and explained the baby has Down’s Syndrome and they were going to end the pregnancy.

Arthur was upset by Laurel and Jai’s decision but questioned whether her decision to have a termination was because of his behaviour.

He said: “Is this because of me? For being a problem.”

When Laurel asked what he meant, Arthur continued: “You just said you can’t cope. Is that because you think the baby’s going to be like me? Another problem you can’t cope with? Because if it is, I’ll be good from now on. I promise.”

Laurel explained to her son it wasn’t to do with him, he begged her to keep the baby. But Laurel said she couldn’t.

Viewers were heartbroken by the scenes and Arthur blaming himself.

Eventually Arthur admitted what he had been doing when his grandfather Sandy died. The two boys continued their feud.

However things went too far on a camping trip when Arthur lit a fire and attempted to blame Archie.