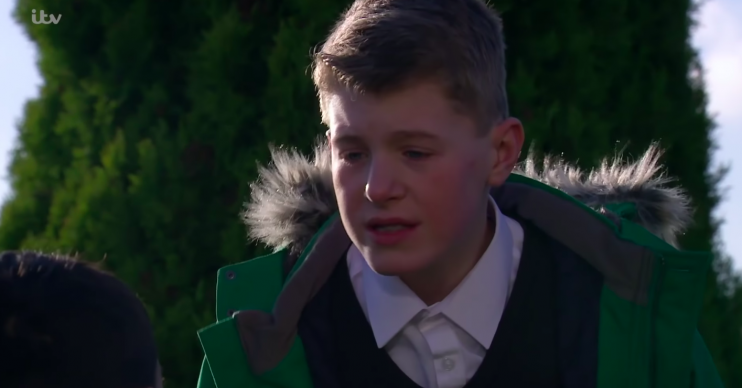 Emmerdale’s Arthur is set to be arrested by police over the deadly fire he starts with victim Archie Sharma.

The devious bully has been tormenting his step-brother for months in a harrowing storyline.

PROMO: Explosions, confrontations and rekindled romance? #Emmerdale, this May on @ITV pic.twitter.com/dIF71pWhSB

However recently Archie has managed to get his own back on Arthur by framing him for an accident that left him injured.

Now next week Arthur’s revenge will take a worrying twist when the jealous youngster thinks Archie is going to take his place in the family.

The family are celebrating Rishi’s 70th birthday with a camping trip – but as Archie and Laurel bond, Arthur sees red and waits until he’s alone with his victim.

The campfire is lit and becomes dangerously out of control – with potentially deadly consequences.

But a new trailer has revealed that Arthur will be caught by police over the inferno.

In a blink and you’ll miss it moment in the trailer, Arthur is confronted by the police about the deadly blaze.

But will he finally admit to what he’s done properly?

Last year, Archie returned to the village to live with dad Jai after the sudden death of his mum, Rachel.

Although Arthur wanted to help Archie at first, he soon started to become jealous of the attention he was receiving, especially from Arthur’s mum Laurel.

He even knocked him out and convinced him no one wanted him around, forcing Archie to run away.

In an effort to cover his tracks of the physical abuse, Arthur framed Jimmy King.

His lies led a police investigation to Jimmy’s door.

After bullying Archie for months, the truth eventually came out.

Read more: Coronation Street and Emmerdale stars the Flanagan siblings dress up to clap for the NHS

With the adults now aware of Arthur’s cruel behaviour, Archie began to use this to his advantage.

He even threatened to get Arthur in trouble if he didn’t do as he said.

Another incident occurred where Archie fell off a bookshelf he had climbed.

However, Archie told his family that Arthur had pushed him getting his own revenge and sparking rage in Arthur.

Will the two boys ever be able to put the past behind them and be friends?