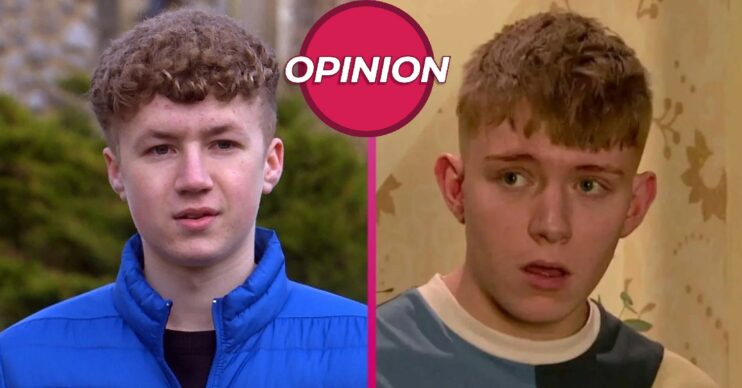 OPINION: Emmerdale and Coronation Street are focusing too much on the teens

The soaps need to stop focusing on their teen characters

The soaps – especially Emmerdale and Coronation Street – have been taken over by teenagers and it has to end.

The joy of soaps is that they feature every single age range from babies to centenarians – or at least that’s the theory.

These days anyone who watches Emmerdale and Coronation Street could be forgiven for thinking they were watching Grange Hill.

In Emmerdale they seem intent on shoe-horning the terminally awful Noah Dingle into every scene.

He is never far from being a misogynistic creep.

With random villager Chloe Harris, neighbour Amelia Spencer or even his own cousin (ish) Samson.

Why do we need to see all of them all of the time when we have so many other characters that we don’t see enough of?

Emmerdale needs to focus on its adults – not its teens

And in Corrie – well let’s just have a show of hands about who needs more Simon Barlow in their life?

What about Amy mooning over drug dealer boyfriend Jacob? Or Summer and her endless ills?

There’s always Nina to save the day – except when she’s being dragged down by Asha.

And then there’s Max – scheming, human awfulness himself.

They need to get upstairs and play their tapes for a few years.

Let’s not think it’s just confined to the ITV soaps either.

Over on EastEnders we’ve got the endless adventures of dull teen mother Jada.

And even if you can fast-forward through that horror show, we’ve got Tommy Moon’s bullying ordeal happening every other episode.

Two gobby tweenagers do not a threatening scene make.

It’s all getting too much. It’s not too much to ask for the adults to take centre stage again, is it?