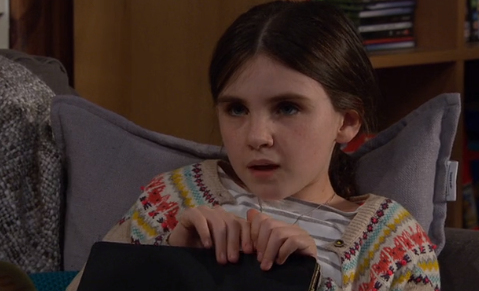 Daisy joined the Flanagan family in January this year!

Amelia flanagan, who plays April Windsor in Emmerdale, has posed for a picture with her sweet puppy Daisy.

She captioned the post: “Daisy dog is just perfect…”

A second commented: “So cute.

Rachel announced back in January that Amelia and her Corrie star siblings Isabella and William would be welcoming a puppy to the family.

On the day after they brought Daisy home, Rachel shared a series of adorable pictures of the actors with their new family member.

Amelia isn’t the only young Emmerdale star to recently welcome a new dog to the family.

Her co-star Harvey Rogerson, who plays April’s half-sister Leo, got a dog for his birthday last month.

The pup has been called Lulu and Harvey appeared overjoyed with his birthday present.

Recently April and Leo have been going through a difficult time as their father Marlon was charged with the murder of Graham Foster.

Although it was later proved that Marlon didn’t commit the crime, it was Pierce Harris, the problems haven’t quite stopped.

A couple of weeks ago, it was revealed April was being bullied by a girl in her class who kept branding Marlon a “murderer.”

After she stood up to the bully, Marlon learnt the truth about what had been going on.

Although he worried Leo had also been bullied, April told him she had asked and he wasn’t being picked on.

Read More: Emmerdale fans in bits as Sam asks Sampson to be his best man

Since his prison release, Marlon has been dealt more and more bad news.

After learning his cousin Charity and her son Ryan stole money from Graham the night he was killed, he felt betrayed his family withheld information that could have seen him released sooner.

He later found out that Kim had hired someone to kill Graham. Feeling he could trust no one, he disowned his family members and asked former stepsons Billy and Ellis to move out.