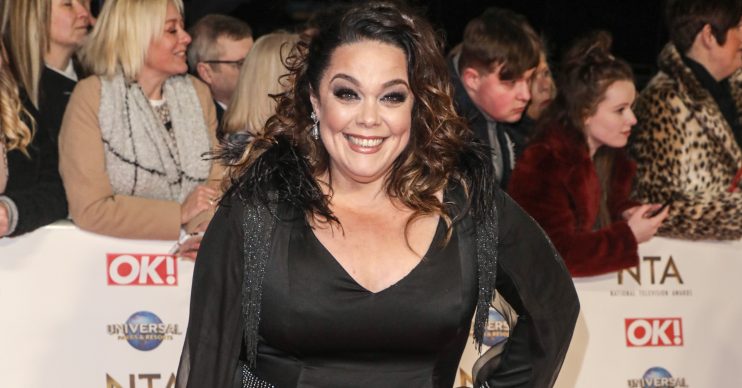 Mandy raised Vinny as if he were her own

Emmerdale actress Lisa Riley, who plays Mandy Dingle, has suggested viewers get a grip over their far-fetched plots suspicions.

She referred specifically to the theory doing the rounds about her and Vinny when she first returned to the village last year.

At the time, Vinny was introduced as her son…

But in a later episode last October we discovered Vinny isn’t Mandy’s son although full details of how they are connected have only emerged recently.

Fans had a field day with all sorts of theories being suggested, including one that Vinny was actually Mandy’s toyboy!

This week, Vinny’s dad Paul arrives in the village and, discussing latest developments at a recent press conference, Lisa addressed those theories.

“People asking, ‘Who is Vinny?’ People think[ing] Vinny is Mandy’s toy boy… Get a grip, on my mother’s ashes that [was] never going to happen!”

Last month Vinny and Mandy explained to her family Sam, Samson and Lydia that she and Vinny aren’t technically related.

However, it is clear Mandy is the closest thing Vinny has to a mum.

She explained she met Vinny when he was a baby and began a relationship with his dad, Paul. Although Paul and Mandy were together for years, he eventually upped and left, leaving his son in Mandy’s care.

People think Vinny is Mandy’s toy boy, get a grip.

Unable to give him up, Mandy raised Vinny as her own.

When will viewers meet Paul?

This week, Mandy flags down a car as she’s looking for Lydia, but is shocked to see Paul is the driver.

Mandy panics when Paul admits he wants to see his son, so she lies he’s no longer in the village.

At Sam and Lydia’s wedding, Mandy is troubled to be keeping such a big secret from Vinny.

As the Dingles gather outside the pub for a family photograph, Paul is lurking from a distance, watching them.

Emmerdale’s scheduling pattern has changed due to the coronavirus pandemic. The soap now airs three episodes a week on Mondays, Wednesday and Fridays at 7pm on ITV.

Are you looking forward to Paul’s arrival? Leave us a comment on our Facebook page @EntertainmentDailyFix and let us know what you think!