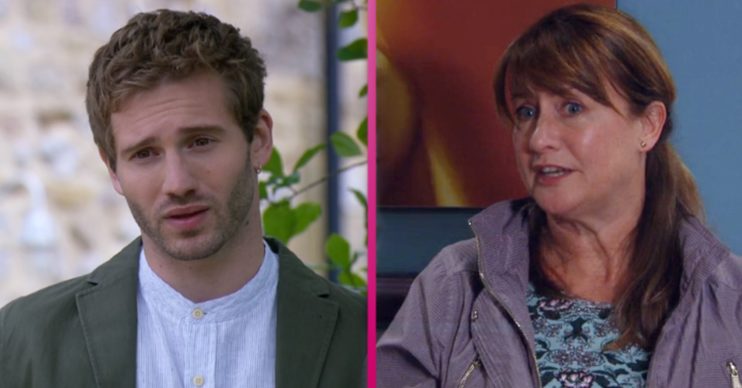 Were the fans wrong though?!

Emmerdale has been accused of ‘bad research’ and a ‘blunder’ after Jamie Tate threatened to evict Luke and Wendy Posner from their cottage, which is owned by his mum Kim Tate.

Jamie recently discovered that his ex-wife Andrea had been thrown out of the B&B for helping him set up Belle Dingle for Moira’s hit and run.

Desperate to keep his daughter Millie in the village, Jamie came up with the idea of evicting mother and son Wendy and Luke from Kim’s property Dale View.

He served them with an eviction notice, telling them they had by the end of next week to leave the property.

A panicked Wendy told her son that although the original contract was up for renewal, Kim told her it would just be a formality.

She also explained that she paid the rent on time and kept the house clean.

Seeking advice from local councillor Nicola, she told them that should sit tight until Jamie gets a court order and that way they can appeal it.

However fans were quick to point out that Jamie can’t just evict tenants for no good reason.

Of course, viewers don’t actually know what sort of agreement was in place… we are talking about Kim Tate here, after all!

Later in the week in Emmerdale (Wednesday, October 7) Jamie ended up drinking by himself.

In his drunk state, he ended up falling over and hitting his head.

Later, Luke went up to Home Farm and ended up finding Jamie unconscious on the floor.

What happens in next week’s Emmerdale?

Jamie is okay though and next week spoilers reveal he and Belle work one last shift together at the vets.

But things soon turn nasty when Belle goes all out for revenge. She switches the two vials of veterinary drugs that Jamie keeps in his car.

When Jamie finds out what she’s done, he tells Paddy. At first she denies it then unrepentantly admits the truth and quits her job, before Jamie and Paddy have the chance to fire her.

When Belle is left alone it’s revealed she’s started hearing the voice of Lisa. Is she not coping?

Later, Nate tries to encourage Belle to stay positive after a meeting with their solicitor.

Meanwhile, the voices convince Belle that Jamie’s wife Andrea is to blame for everything that she’s going through.

Belle decides to take action. But later, Jamie sets a plan against Belle in motion…