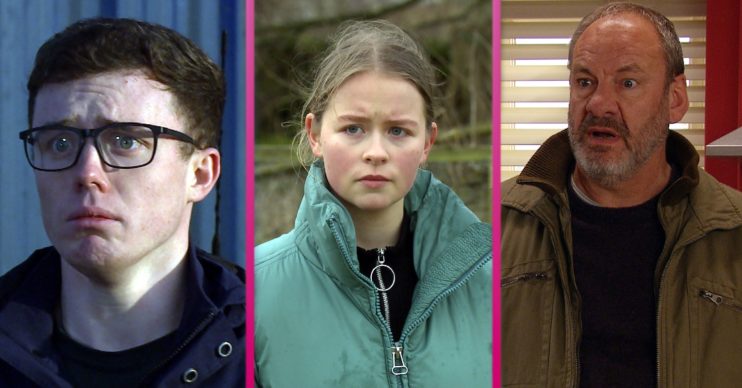 Emmerdale fans are convinced a second character will die tonight (Friday, April 2) after the tragic twist in last night’s episode.

Liv figured out Paul had been beating Vinny and wanted him to confess to what he’d done.

However Paul became aggressive and started violently attacking Liv, kicking her on the ground.

Meanwhile Jimmy was on his way to go get the kids after getting the call from Amy that Juliette wanted to pick them up.

However the glare from the sun left him unable to see and he ended up crashing through farming buildings and into Mandy and Paul’s wedding barn, where Paul was beating Liv.

After crashing, Jimmy got out of the van and called for help.

Liv ended up waking up and tried to help Paul, who was trapped under a beam. However due to the gas cans and a loose electric cable, a fire started.

Later, we saw Liv, Jimmy and Paul all led in hospital beds. Mandy received a call and after learning what happened, she rushed to the hospital.

However there was a huge twist when Vinny was also wheeled into the hospital.

Still think there could be a second death tomorrow.

Sam told Mandy he found him passed out at Wishing Well Cottage, but they were both unaware Paul had beaten him again earlier.

Read more: Who is Mandy Dingle’s mum in Emmerdale? Has Vera-Lynn Dingle ever been seen on-screen?

At the end of the episode, Paul was pronounced dead. However fans are convinced another character will die tonight!

Currently Vinny, Liv and Jimmy are all still in hospital. Could they still be in danger of losing their lives?

Are you looking forward to tonight’s Emmerdale episodes? Leave us a comment on our Facebook page @EntertainmentDailyFix and let us know what you think of this story.