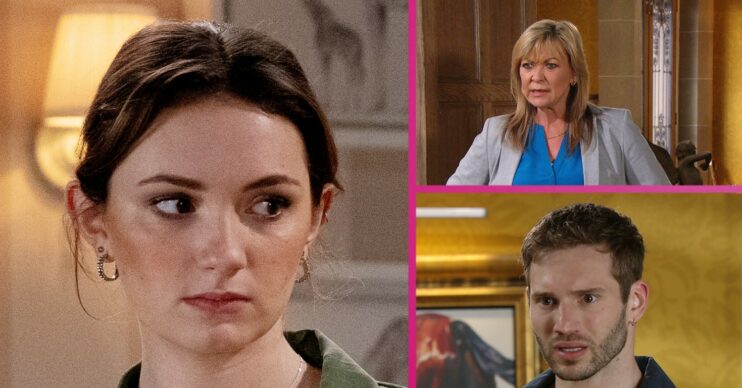 Emmerdale: 6 theories on who Gabby shot

Gabby shot someone in the woods

Emmerdale character Gabby shot someone in tonight’s episode (Wednesday, May 11).

After finding evidence Jamie Tate is still alive, Gabby has been left fearing that Jamie will come back and try to kidnap their son, Thomas.

This week, Gabby learnt a hoodie figure was spotted on Home Farm CCTV and in tonight’s scenes she shot someone in the woods.

But who did she shoot?

Emmerdale Gabby: Who did she shoot?

The first theory is that Jamie actually is back and really is trying to take Thomas.

Jamie faked his death last year and has been staying with his former mother-in-law Hazel.

Kim believes her son is dead, but Gabby realised Jamie was still alive after finding evidence in Hazel’s house.

Although Emmerdale has been dropping hints Jamie is back, we haven’t actually seen him on-screen since November 2021.

But some fans think this is his return and it was him who was shot.

Jamie is clearly back! #Emmerdale

I think it is Jamie after Gabby #Emmerdale

Another theory is that Joe Tate is back for revenge on Kim Tate.

Back in 2018, Joe was forced to flee the village as his step-grandmother Kim had been released from prison and wanted him dead after discovering he’d been spending her money.

Kim ordered Graham Foster to kill Joe, however Joe ended up being punched by Cain Dingle.

Cain was furious at Joe for leaving daughter Debbie waiting at the altar.

Cain believed he killed Joe, however months later it was revealed Joe survived and Graham helped him escape.

Joe hasn’t returned to the village since, but some fans are convinced he’s the one sneaking around Home Farm, planning to get back at Kim.

Joe TAte got to be
#Emmerdale

Some fans are predicting that it could even be Andrea Tate at Home Farm.

Andrea Tate was murdered by Meena Jutla last year, however some are convinced that Andrea didn’t die and has been in some sort of witness protection.

Viewers will know Andrea never had an amazing relationship with former mother-in-law Kim and wasn’t impressed when ex-husband got 19-year-old Gabby pregnant.

Could she be back in the village and could Gabby have shot her?

Anyone else think it's Andrea who is still alive and stalking Gaby? #Emmerdale

Emmerdale: Who did Gabby shoot?

Another theory is that Gabby shot Will Taylor.

Will Taylor is the fiancé of Kim Tate and lives at Home Farm with her and Gabby.

He also is working for Kim’s haulage company.

One fan thinks it was Will who got shot as he was walking around the grounds of his home.

So if theories are correct and Will gets shot and killed, does that mean you’re leaving #emmerdale to film #lifeonmars @Deanoandrews?

A couple of fans are predicting that Gabby has accidentally shot Kim.

Kim is Jamie’s mother and grandmother to Thomas.

Gabby has been living at Home Farm with Kim for a long time now and it’s not unusual for her to walk around the grounds of her estate.

Another theory is that there isn’t anyone lurking around Home Farm and it’s all in Gabby’s head.

Ever since finding out Jamie is alive, Gabby has been worried he is going to return and take their son.

However some fans are wondering if there really is someone hanging around Home Farm, or if Gabby is seeing things.

Who do you think Gabby shot?