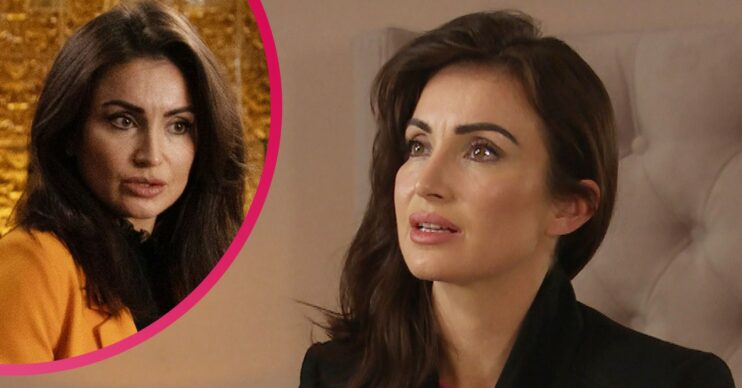 The wedding planner has her own bombshell to drop

The wedding planner has been behaving suspiciously for weeks now and well it’s become obvious.

Next week a new hint will be dropped by the soap but we want to know what she is hiding.

So here are the most likely theories…

Yes, Leyla has only just got married and yes she’s usually faithful – mostly – but she also lives in Emmerdale.

And it is a rule unwritten and probably actually written that in the village everyone cheats eventually.

So with her suspicious behaviour, the obvious conclusion is that she’s having an affair. With Suzy?

Spoiler fans know that Leyla has a secret connection to newcomer Suzy.

She’s the woman who was randomly carrying a cake through the village with no client in sight, nor bakery to come from. Suspicious if you ask us!

But could she be Leyla’s secret sister?

The woman was just shot – and was up and running around just hours later.

If anyone is knocking back painkillers like sweets, it’s Leyla Cavanagh.

There was a scene last month where she had mislaid some painkillers and that seemed to suggest that she was becoming reliant on them.

But does Emmerdale need another addict?

If there’s anyone who needs therapy in Emmerdale – it’s Leyla.

She’s just been shot; months after losing her baby, her step-daughter was murdered; her husband is at best emotionally absent and her son was targeted by a paedophile step-mother.

It wouldn’t be a surprise to see Leyla in therapy dealing with her issues.

It would be wildly random to have Leyla secretly keeping Andrea Tate both alive and secret, but this is Emmerdale and stranger things have happened.

So obviously Andrea survived and her business partner is helping her to stay under the radar.

Leave us a comment on our Facebook page @EntertainmentDailyFix and let us know what you think Leyla in Emmerdale is hiding.