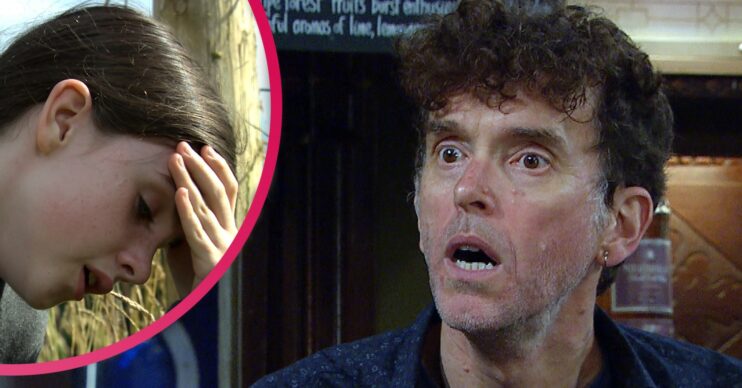 Emmerdale: 4 clues Marlon missed that April is being bullied – as he’s slammed by viewers

April is being bullied by Cathy

Emmerdale viewers have slammed Marlon Dingle as he missed four huge signs his daughter April is being bullied again.

Earlier this year, April Windsor set up a social media page for those grieving after the shock death of Leanna Cavanagh.

At first the page seemed to be going well, however April soon found she was being bullied by an anonymous troll account, which led to her school peers joining in.

Marlon found out about the bullying and decided to take April’s phone away to protect her.

However he gave it back to a few weeks later. He instructed April not to use social media, but she decided to download her apps again.

As she reactivated her accounts, the bullying started again. It was later revealed that the anonymous troll was none other than April’s friend, and aunt, Cathy.

Earlier this week, April found out her number had been shared online and she as being bombarded with awful messages.

She told Marlon she was ill and she ended up being sick, as it all became too much for her.

Outside of their house, Marlon spoke to April about her feeling sick.

Soon April’s phone began receiving text messages and Marlon even pointed it out saying: “You’re popular today. All those texts.”

He even asked if it was anyone he knows. He begged April to talk to him, saying he could see something was wrong.

As April said there was nothing he could do, Cathy came along. Marlon asked Cathy what was bothering April.

When April said she was feeling better, Marlon went back to work, leaving Cathy with April.

However fans were baffled as to how Marlon hadn’t figured out that April was being bullied again, considering all the clues.

Not only did she come home from school, clearly being sick with worry, her phone kept going off and he practically caught her lying about why she came home.

Fans were quick to question how he hadn’t figured it out.

Oh Marlon can't you see it's the bloody phone going off, that's a hint like before, Ffs #emmerdale

Still don't understand Cathy's end goal, or why Marlon hasn't noticed anything considering he already knew what was going on before. #Emmerdale

In the real world, the parent would snatch the mobile phone from their child's hand, especially as you know that they have been receiving nasty messages in the past. Come on Marlon you can tell she's not herself and suffering in silence. #emmerdale

Shouldn't Marlon already know? Was only a few weeks ago he found out about the Donna messages #Emmerdale