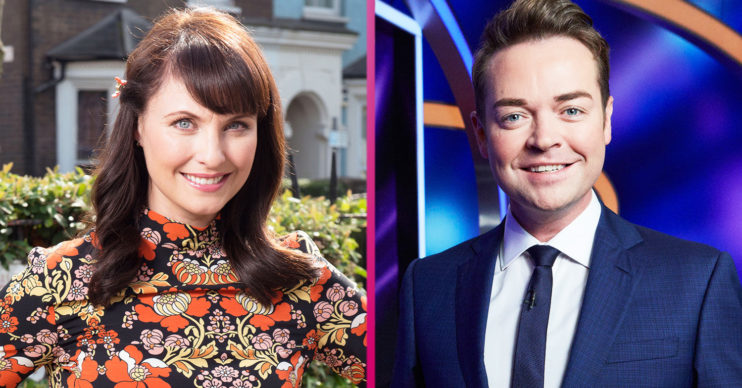 The EastEnders actress previously dated one of her co-stars

Emma Barton has a complicated love life on-screen in EastEnders.

Away from the cameras, the stunning actress, 43, hasn’t exactly been short of offers either.

The former Strictly favourite has previously dated one of her co-stars and was also in a relationship with Stephen Mulhern, 43.

But why did Emma Barton and Stephen Mulhern split and who is she dating now?

Why did Emma Barton and Stephen Mulhern split?

Read more: Is Alesha Dixon married and why did she split from first husband Harvey?

Emma is thought to currently be single.

Before she dated the Catchphrase host, she was in a relationship with her EastEnders co-star Joel Beckett

Her Instagram is dedicated to pictures of work, family and her adorable pet pooch Poppy Dog – with no sign at all of any romance.

“Perry [Mitchell] told me to chat her up, and I remember walking over to her and saying, ‘Alright darling… Wow, you smell nice.’

But the actress has been in the past to ex-husband Nigel Stoat.

The former couple were husband and wife for three years but divorced in 2005 – around the time she joined the cast of EastEnders.

At the time, a source close to the couple told The People that both Emma and Nigel were “devastated” to be separating.

They said: “Both are devastated their marriage didn’t work out.

“Ultimately it was Emma who decided they couldn’t go on. It hasn’t been easy on either of them.”

Does Emma Barton have children?

Emma doesn’t have any children of her own.

However, on-screen her character Honey is a mother of two to daughter Janet and son William.

During an interview with the Express in 2015, Emma opened up about playing a mum in EastEnders.

She said: “They’re really good kids and I love them to bits. Grace, who plays Janet, calls me Mummy Emma and gives me big hugs, and I help her with her scenes.

“I don’t have any children and I must scare them because I’m literally trying to be their mother!”

How much is Emma Barton worth?

Emma’s net worth is approximately between £760,000 and £3 million, according to Net Worthspedia.

She’s been a main fixture in Albert Square since 2005.

BBC bosses haven’t revealed the exact salaries of individual EastEnders cast members but stars are thought to earn up to £200,000 a year.

Is Emma Barton on social media?

You can also keep up to date with Emma by following her on Twitter.