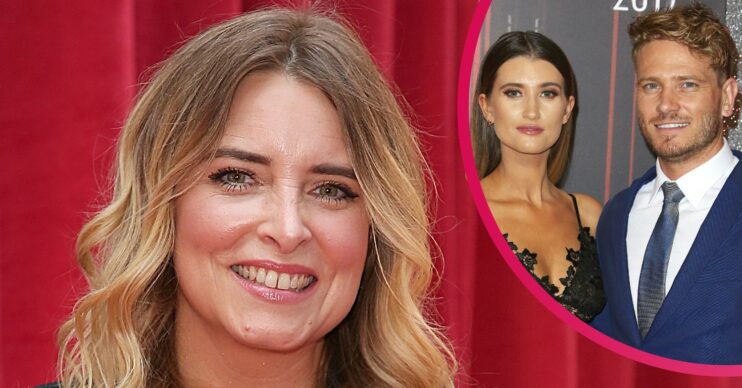 The Charity Dingle actress was one of the bridesmaids

Emma Atkins has revealed she was “gutted” over co-star Charley Webb‘s secret wedding to Matthew Wolfenden.

The Emmerdale couple married in a surprise ceremony in 2018 and Emma was one of the bridesmaids.

However, the Charity Dingle actress has admitted she was left kicking herself when she realised what was going on.

The Debbie Dingle actress and her co-star other half invited everyone to a 30th birthday party for Charley in February 2018.

But in fact, the couple were planning to get married in a surprise ceremony.

Emma, who is close pals with Charley and also plays her mother in Emmerdale, was asked to be a bridesmaid.

But like all the other guests, she was only told on the day what was happening and didn’t feel at all prepared!

Emma Atkins ‘gutted’ over the wedding

In an interview with OK! magazine, Emma has now revealed she didn’t think she “looked that great”.

“I was gutted because I didn’t look that great and she [Charley] said, ‘Make sure you come looking great.’

“Well, when I turned out to be one of the bridesmaids… I was like, ‘This dress should have been a better dress!’ and Charley went, ‘Well, I did tell you!'”

Charley and Emma are as close as sisters.

They live almost next door to each other and spend lots of time together with their respective families.

Charley might have left Emmerdale as Emma’s on-screen daughter, but there is still plenty of drama for Charity.

She is the new owner of the Woolpack, but is struggling to run it in the absence of chef, and cousin, Marlon Dingle who has had a stroke.

Charity has also been caught between two lovers.

She was with Vanessa Woodfield, but cheated with Mackenzie Boyd.

Charity and Mack got together and Vanessa was away for a while, but when she returned she it was clear she and Charity were still in love.

Mack dumped Charity, who turned back to Vanessa, however, Vanessa also rejected her.

Despite Charity begging Mack to take her back, he’s made it very clear she’s on her own.