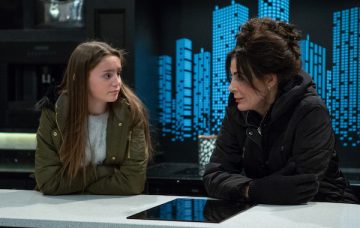 She'll stop at nothing to get justice

Sarah Sugden is beside herself with worry as her mum, Debbie Dingle, prepares for her impending court case next week.

There is a very high chance that Debbie could be facing jail after her involvement in Ross Barton’s acid attack – and it seems even the rest of the Dingles are convinced she will be spending Christmas at Her Majesty’s pleasure.

As an anxious Debbie says goodbye to her loved ones as she leaves for court next week, it is clear that while everyone hopes she will be home by that evening, no one really believes that she will.

Sarah is heartbroken at the thought of her mum going to prison, clearly blaming Graham and Joe for everything that has happened.

But while everyone understands her anger, Faith is totally taken aback by the level of fury that she is clearly feeling.

Still hurt by the fact that she thinks Joe left Debbie standing at the altar, Sarah is struggling to cope without him in her life any more.

Emmerdale fans will know, that Joe is actually dead, having been knocked down with a single punch by Cain Dingle during an argument, but eventually killed by Graham Foster.

Later next week, Faith is stunned to find a weary Sarah at Home Farm, poised and ready to throw a rock through the window, desperate for revenge for the predicament that her mum is in.

Thankfully Faith is on hand to stop her doing anything daft, and Sarah breaks down, terrified about what the future might hold for Debbie.

But it seems all is not lost, and it isn’t long before the sneaky pair have come up with a plan to get revenge on Graham.

Breaking in to Home Farm, they plot to get even once and for all… but what will they do to make Graham realise you don’t mess with the Dingle clan?

Do you think Debbie deserves to go to jail? Leave us a comment on our Facebook page @EntertainmentDailyFix and let us know what you think!